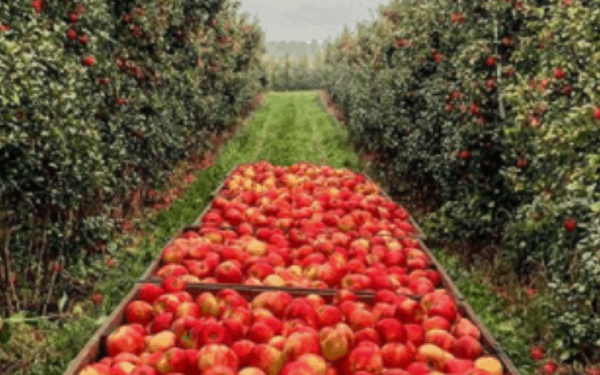 You might not be surprised to learn that, with so many apple orchards in Michigan, the state is a major contributor to the apple market. In fact, Michigan apple farmers produced about 10% of the nation’s apples in 2018. There are numerous Michigan cider mill locations too. If you’re craving the flavors of fall this year, check out some of the best apple orchards and cider mills in Michigan with family activities.

There aren’t too many orchards in the Upper Peninsula that grow apples. Sunny G Orchard stands out because it offers tours and hayrides for anyone who wants to schedule a visit to see what life is like on the farm. The family-owned and -operated orchard is an up-and-coming farm and grows more than 10 apple varieties.

From late September through October, you can pick your own apples at Knaebe’s Apple Farm & Ciderworks. While you’re only allowed to pick select varieties on your own, all of the apples are available for purchase in the main barn. Along with picking apples, Knaebe’s serves hard cider and wood-fired pizza in the Ciderworks. You can visit the corn maze, playground, and animals, or try your hand at the Mac ‘n’ Squasher apple slingshot while you’re there.

Friske’s Farm Market is one of the best orchards in Michigan if you’re looking for fall activities. It opens for U-pick apples in early September. You can enjoy a home-cooked breakfast or lunch in the Orchard Cafe, and purchase a range of products in the market, bakery, and gift shop. Children love the playground and petting zoo. On top of that, Friske’s hosts three fall events: Harvest Festival in late September and Fall Fest and Apple Fest Days in early October.

Anytime you want to pick apples in early September through October, visit King Orchards. While you’re there, check out the bakery. It creates homemade pies, jams and jellies, and other farm-fresh treats with its fruits. Unpasteurized apple cider is available also. Take the opportunity to enjoy the view of Grand Traverse Bay and Torch Lake during your visit as well.

It’s easy to spend an entire day at Lewis Adventure Farm & Zoo, which is open from mid-September through October. Although it’s not in the name, it has an orchard where you can pick all kinds of apples every day of the week, from Cortland and Empire to McIntosh and Red Delicious. The farm has more than 46 attractions too, including a corn maze, pumpkin patch, carousel, farm skeeball, and pedal carts. In addition, the petting zoo has more than 100 animals.

Since 1911, Robinette’s Apple Haus & Winery has been a staple. It offers U-pick apples from mid-September until the end of the season, and cider is made on-site. From early September, the 6.5-acre corn maze is open and doesn’t close until the end of October or early November. The petting zoo, hayrides, and jumping pillow are open if the weather is good. Also, the bakery makes about 200 dozen doughnuts per hour, and wine tasting is available in the barn.

U-pick apples are available at Crane Orchards every day from Labor Day until the season ends. Among the many apple orchards in Michigan, it has one of the largest varieties of apples. You can even taste test them before you go apple picking. Golf cart rides are often available to get around the orchard if you don’t want to walk. During the U-pick season, the 20-acre corn maze, cow train, and hayrides are open.

Gull Meadow Farms is one of the most-happening Michigan apple orchards. The U-pick orchard has been operating for more than 25 years. You can pick several apple varieties from early September, and stop by the barn and bakery for apple-baked goods, cider and doughnuts. The apple cannons are a favorite fall activity alongside the pumpkin patch, 6-acre corn maze, wagon rides, petting farm, and pig races.

In mid-September, Big Dan’s U-Pick’em lets you pick your own apples and pumpkins. The farm grows more than a dozen apple varieties. Additionally, caramel apples, cider, other fruits and produce, and farm-made products are available for purchase in the farm market.

Since 1852, Phillips Orchards & Cider Mill has been growing delicious apples. Over the years, six generations of the family have lived on the fruit farm, and the ciders are named after them. Every September, this Michigan cider mill lets you watch as more than 30 apple varieties are turned into cider. It uses a traditional rack and cloth press, and the flavors vary slightly throughout the season depending on the apples that are available. You can stop by the Phillips market for delicious treats as well.

In the early 1900s, Uncle John’s Cider Mill was a cattle barn. Although it was converted into a cider press, it maintains the same charm of its early days. The mill makes cider the old-fashioned way without additives, preservatives, or pasteurization. You can watch the fresh cider being made while the mill is open in September and October. While you’re there, you can enjoy caramel apples, fresh bakery items, the 5-acre corn maze, pumpkin patch, and 40-foot mining sluice.

Montrose Orchards is open for U-pick apples and pumpkins throughout the fall. Tours of the orchard are available for groups. You can watch cider being pressed, go on hayrides and meet some of the farm animals. During the season, there may be an arts and crafts show too. At the market, you can purchase apples, cider, and other local products.

As one of the family-run apple farms in Michigan, Clearview Orchards focuses on growing and selling apples and peaches. It opens in early September for U-pick apples, and McIntosh apples are one of the first varieties available.

From late August through early November, Country Mill Orchard & Cider Mill is open for picking your own apples by the half bushel. If you don’t want to pick apples, you can buy bags in the farm market instead. Wagon tours of the orchard and cider mill are available in September and October with a focus on apples and pumpkins. The tours include fun in the indoor inflatable play area, exploration in the corn maze, and time using the apple cannon. Afterward, you can stop by the bakery for caramel apples, doughnuts, and pies.

Offering tons of family fun in the fall, Blake’s Orchard & Cider Mill is one of the best orchards in Michigan. The U-pick apples from early September through early November are just the beginning. You can visit Blake’s Orchard Funland and Blake’s Big Apple Funland for numerous attractions, such as an animal petting farm, water duck races, animated scarecrow band, and wagon rides. Also, each Funland has unique attractions and locally sourced treats.

Westview Orchards & Winery has been going strong for more than 200 years. From mid-August to the end of October, you can pick from a variety of apples. You can even pick your own pumpkins from late September. The property features a children’s play area, animal barn, outdoor petting area, giant slide, and more as well.

At Yates Cider Mill, fresh apple cider is produced right before your eyes. The orchard has more than 15 apple varieties, and you can bag your own or buy pre-bagged apples. The mill uses a water-powered, double-tap process to make up to 300 gallons of cider every hour. There are on-site pony rides, a petting zoo, a ⅕-mile river walk trail, and an ice cream shop with a signature doughnut sundae and 20 flavors.

Organic apple orchards are less common in Michigan, but Plymouth Orchards & Cider Mill is one that fills the gap. Although it doesn’t allow you to pick apples, you can watch while the award-winning cider is made. The process starts with equipment that peels the apple skins within seconds and moves hundreds of apples through the press. The orchard has a pumpkin patch, farm animals, wagon rides, and live music too. Fresh cider, doughnuts, and pies are available to take home.

With the array of apple orchards and cider mills in Michigan, you’ll have no trouble getting a taste of autumn this year. Visiting several of these locations is a great way to enjoy the fall colors at the same time. As you’re driving, consider discovering other Michigan cider mill and apple orchard locations that aren’t on this list. Let us know what you find in the comments below!