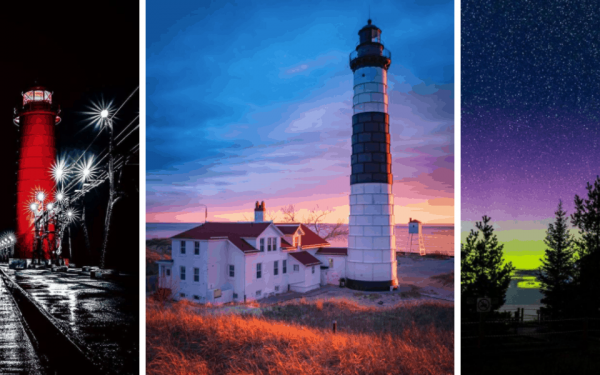 Since the Great Lakes are so large, the shorelines are a lot like ocean coasts and pose a danger for ships. Lighthouses line these waterfronts to guide them through rivers and into harbors. You would probably be surprised to learn how many lighthouses are in Michigan — 129 towers! This means that Michigan has the most lighthouses in the country.

Of those, 113 lighthouses are on the Great Lakes, with 44 of the towers around Lake Michigan. The Great Lakes Lighthouse Keepers Association (GLLKA) has a great map of all the lighthouses in Michigan. From plain to art deco exteriors, here are some of the most amazing Michigan lighthouses that you can explore.

Resting among the pine trees of Isle Royale National Park, Rock Harbor Lighthouse sits at the mouth of Rock Harbor. The white round brick tower is attached to a keeper’s house that has been converted into a museum. You can only access the light via ferry, private boat, or seaplane.

Located in a harbor in the Upper Peninsula, Copper Harbor Lighthouse consists of dressed stone and brick. The square tower has an attached keeper’s house. You can take a ferry to the 1866 light and explore the historical museum.

Built in 1855, Eagle River Lighthouse was a guide for ships calling to Eagle River port. You can arrange to stay at the lighthouse, which has tons of living space. During your visit, you could explore Eagle River Falls, Keweenaw National Historical Park, and the other historic landmarks on Keweenaw Peninsula.

Sand Hills Lighthouse is a privately owned property and bed-and-breakfast, so it’s closed to the public. Despite that, you can tour the grounds and tower if you stay at the inn. It was built in 1919 as a warning about the nearby reef. During World War II, the property was used as a training facility for the U.S. Coast Guard.

With the brightest light on Lake Superior — visible for 20 nautical miles — Big Bay Point Lighthouse continues to aid Coast Guard navigation in the Upper Peninsula. Tours of the 60-foot, square tower are available from June to September, and you can stay at its two-story bed-and-breakfast.

Within Pictured Rocks National Lakeshore, Au Sable Light Station is 86 feet tall and extends underground for 23 feet, which anchors it to the bedrock. You have to walk for 1.5 miles to access the grounds and tower, which are open for 30- to 40-minute tours during the summer.

With grounds that are always open to the public, Crisp Point Lighthouse is one of the harder mainland Michigan lighthouses to access. It was built in 1903 and decommissioned in 1993. Because of preservation efforts, it still stands 58 feet tall.

Positioned at a critical turning point for vessels, Whitefish Point Light Station is the oldest operating tower on Lake Superior. The complex of buildings around the light includes the Great Lakes Shipwreck Museum, where you can learn about the Edmund Fitzgerald ship and more.

At the entrance of St. Marys River, Point Iroquois Lighthouse marks the narrow channel for passing sailors. The 65-foot brick tower is open for tours from May to October, but the grounds are always open to the public.

St. Helena Island Light Station in West Michigan was abandoned for years, but the GLLKA has been working to restore it. You can see the 63-foot tower from a distance from St. Ignace, or take a ferry from Mackinaw City to get a closer look. To stay at the lighthouse, apply for the volunteer program.

Attracting thousands of visitors every year, McGulpin Point is rich in history. Available are self-guided cellphone tours of the grounds, the Village of Mackinaw City, and Heritage Village. The discovery trail at McGulpin Point Lighthouse talks about these historical grounds. Also, you can stay in the apartment next to the lighthouse.

Open to the public for tours, Grand Traverse Lighthouse offers an excellent view of Lake Michigan. The keeper program lets you stay at the living quarters on the northern side of the tower. Additionally, there’s a playground at Leelanau State Park and treasure hunts for kids.

For decades, Mission Point Lighthouse has been an icon for Old Mission Peninsula and Traverse City. From May to October and weekends through November, self-guided historical tours are available. The nearby beach, park, and trails are open to the public all year, though. There’s a keeper program too.

Whether you’re at Sleeping Bear Dunes National Lakeshore or on the ferry, you can see South Manitou Island Lighthouse. The 100-foot light station is the island’s most familiar landmark. You can climb the 117-step staircase for a wonderful view of the Manitou Passage, island, and mainland.

South of Sleeping Bear Dunes National Lakeshore is Point Betsie Lighthouse. A Boathouse Museum, fog signal building, and keeper’s residence are on the property as well. Self-guided and semi-guided tours are available, and you can reserve the keeper’s quarters.

From early May to late October, Big Sable Point Lighthouse is open for tours and stays in the keeper’s quarters. At more than 100 feet tall, it’s a major attraction for Ludington State Park. You can reach the lighthouse at the end of a less than 2-mile trail.

Like Muskegon, Grand Haven has two lighthouses. However, both are located on the south pier and painted red. You can walk the lighted catwalk that connects them to Grand Haven State Park and the beach. In addition, the pier is popular for fishing and watching the sunset.

One of the most well-known lighthouses in West Michigan, Holland Harbor Light is a walk down the boardwalk from Holland State Park. It has been guiding boaters on Lake Michigan for more than a century. Keep in mind that it’s only open to the public a couple of days per week, but taking your photo with Big Red in the background is one of the best things to do in Holland Michigan!

Sitting at the mouth of the Black River on the South Pier, South Haven Light has been operational since 1872. At about 35 feet tall, it’s a shorter version of the Muskegon South Pierhead Light. Although it’s not the original tower, the catwalk leading to it is original.

Standing 83 feet, DeTour Reef Light was built in 1931 to guide ships around a dangerous reef near the easternmost point of the Upper Peninsula. Public tours are available on Saturdays between Father’s Day and Labor Day weekends, and the keeper program lets you stay overnight.

Marking where Lake Michigan and Lake Huron meet, Old Mackinac Point Light helps passing ships navigate the Straits of Mackinac. The light station is open to the public for tours, which include a 15-minute movie about area shipwrecks, several exhibits, and a fog signal whistle demonstration.

Cheboygan River Front Range Light guides vessels from Lake Huron to harbors along the river. A keeper program allows volunteers to stay at the light station and open it for tours Thursday through Sunday between Memorial and Labor Days. After that, tours are available on weekends through October.

Located in Lighthouse Park, 40 Mile Point Lighthouse was completed in 1896. While the grounds and park are open to the public all year, the pilot house and lighthouse museum are only open for tours between Memorial Day weekend and mid-October. Also, you can join the keeper program.

Along the northeastern shore of Lake Huron, three historic lighthouses on Presque Isle symbolize the area’s rich maritime history. The Old and New Presque Isle Lighthouses are open for tours. At 113 feet tall, the new light station is one of the tallest that you can climb in Michigan.

Since 1869, Sturgeon Point Lighthouse has been navigating vessels along a treacherous section of shoreline. It’s 70 feet, 9 inches tall and open to the public for self-guided tours during the summer. The keeper’s quarters is a maritime museum.

In Tawas Point State Park, you’ll find a Victorian-era style light station — Tawas Point Lighthouse. Over the years, it has been remodeled several times. Along with delightful Lake Huron sunrises and Tawas Bay sunsets, 45-minute summer tours and a keeper program are available.

Remotely maintained by the Coast Guard, Pointe aux Barques Lighthouse is one of the 10 oldest Michigan lighthouses. You can climb the tower on various dates, but the museum and gift shop are always open to the public.

If you want to visit the oldest erect lighthouse in Michigan, go to Fort Gratiot Lighthouse. The light station and a Coast Guard station watch over the St. Clair River waterway. Weather permitting, 30-minute tours of the tower are available, as is a keeper program.

Lighthouses on the Detroit River

Owned by the Coast Guard, Windmill Point Lighthouse stands in place of a once 30-foot stone windmill. It’s located in the city of Grosse Pointe Park on the shore where Lake St. Clair meets the Detroit River, which flows into Lake Erie. Only the grounds are open to the public.

On the northeast side of Belle Isle in the Detroit River, William Livingstone Memorial Lighthouse is a tribute to William Livingstone, an instrumental figure in Michigan’s maritime history. It’s the only tower in the country made of marble, and only the grounds are open for viewing.

On the largest island in the Detroit River, Grosse Ile North Channel Lighthouse serves mariners who sail around Grosse Ile Township. The best way to see it is by boat because houses block the view from land. At 40 feet tall, the tower is only open for tours the Sunday following Labor Day.

As mentioned, the list above is only a small sample of the Michigan lighthouses that you can visit or at least photograph from a distance. Did we miss one of your favorites? Share your photos of Michigan lighthouses and tips for exploring the towers with us on social media (@awesomemitten). Tag photos with #mittenlove for a chance to be featured on our social profiles or website!

More to Explore on Michigan’s Shorelines

In addition to lighthouses, Michigan’s shores on the Great Lakes have beautiful beaches. Take a look at our lists of Lake Michigan beaches and Lake Huron beaches to explore. You could check out beaches along Lake Superior and inland lake beaches and riverfronts, too.