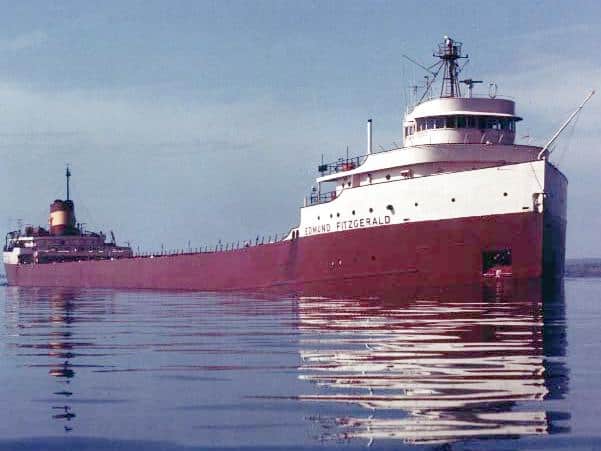 The Wreck Of The Edmund Fitzgerald

You’ve probably heard the song and you might have heard a little about the boat itself. It was the tenth of November, 1975. The S.S. Edmund Fitzgerald had set sail from Superior, Wisconsin, just the day before, and was headed to Detroit to deliver it’s load of iron ore to Motown. It was a routine trip – one that the “Big Fitz” had been making for 17 years, but unfortunately this would be its final voyage, and also the final voyage of the 29 men who made up its crew. On this day, the 10th of November, in 1975, amidst 85 mile per hour winds and waves as high as 35 feet, the Edmund Fitzgerald sank. No distress call was received.

At the time, the Edmund Fitzgerald was the largest vessel to sail the Great Lakes and the numbers are mind boggling. At 729 feet long, it was less than 100 feet shorter than the Titanic. 39 feet tall (not including cabins and antennae). A breadth of of 75 feet. A propeller 19.5 feet across. An empty weight of 13,632 tons. A capacity of 26,000 tons. 7,500 horsepower. Several records regarding the largest loads ever transported upon the great Lakes. Let those figures sink in a little bit. I am fortunate enough to have been to the Soo Locks, and fortunate enough to see similar, if a little bit smaller vessels pass through. A ship of this size is the definition of sheer awesomeness.

It was christened in 1958 after being built by the Great Lakes Engineering Works in River Rouge, and named for the president of the Northwester Mutual Life Insurance Company, Edmund Fitzgerald. In its short, 17-year life it made almost 750 trips, supplying Detroit and other Great Lakes ports with the iron ore needed for industry and manufacturing.

The Fitzgerald was more than that raw power and size, though. Compared to its peers, the Fitzgerald was downright luxurious. It was outfitted with thick, plush carpeting and air conditioning (even in the crew quarters). Two dining rooms were supplied by a large, fully stocked galley. The pilothouse was outfitted with the absolute state of the art navigation equipment and a beautiful map room as well.

Before the wreck in 1975, the Edmund Fitzgerald had a few cuts and bruises. A few of these happened at the Soo Locks, a few others in Duluth where most of the iron ore was loaded. The final wreck, however, was far more extraordinary. The storm in which the Fitzgerald sank was one of the worst on record. It was travelling in tandem with the Arthur S. Anderson, and the Anderson was only 10 or 15 miles away when the Fitzgerald went down. Even more astonishing was that the Fitzgerald was a similar 10 or 15 miles from the safe harbor of Whitefish Bay.

But honestly, the ship is of little consequence. On this, the 37th anniversary of the wreck of the Edmund Fitzgerald, please take a moment to remember what really matters: The 29 men men who lost their lives with that amazing ship. Think of them and how their families were barely notified, some finding our via television or radio. Think of them and how their last thoughts were most likely those of determination and resolve in the face of death.

If you want to learn more, here are several amazing sources of information regarding the ship, and especially her crew: