Anyone who’s familiar with the Munising area is aware of its two preeminent outdoor attractions: Pictured Rocks National Lakeshore and Grand Island. Both places are just a few miles from the heart of Munising.

Both are also known as warm-weather destinations – much more so than many other U.P. attractions, in fact. 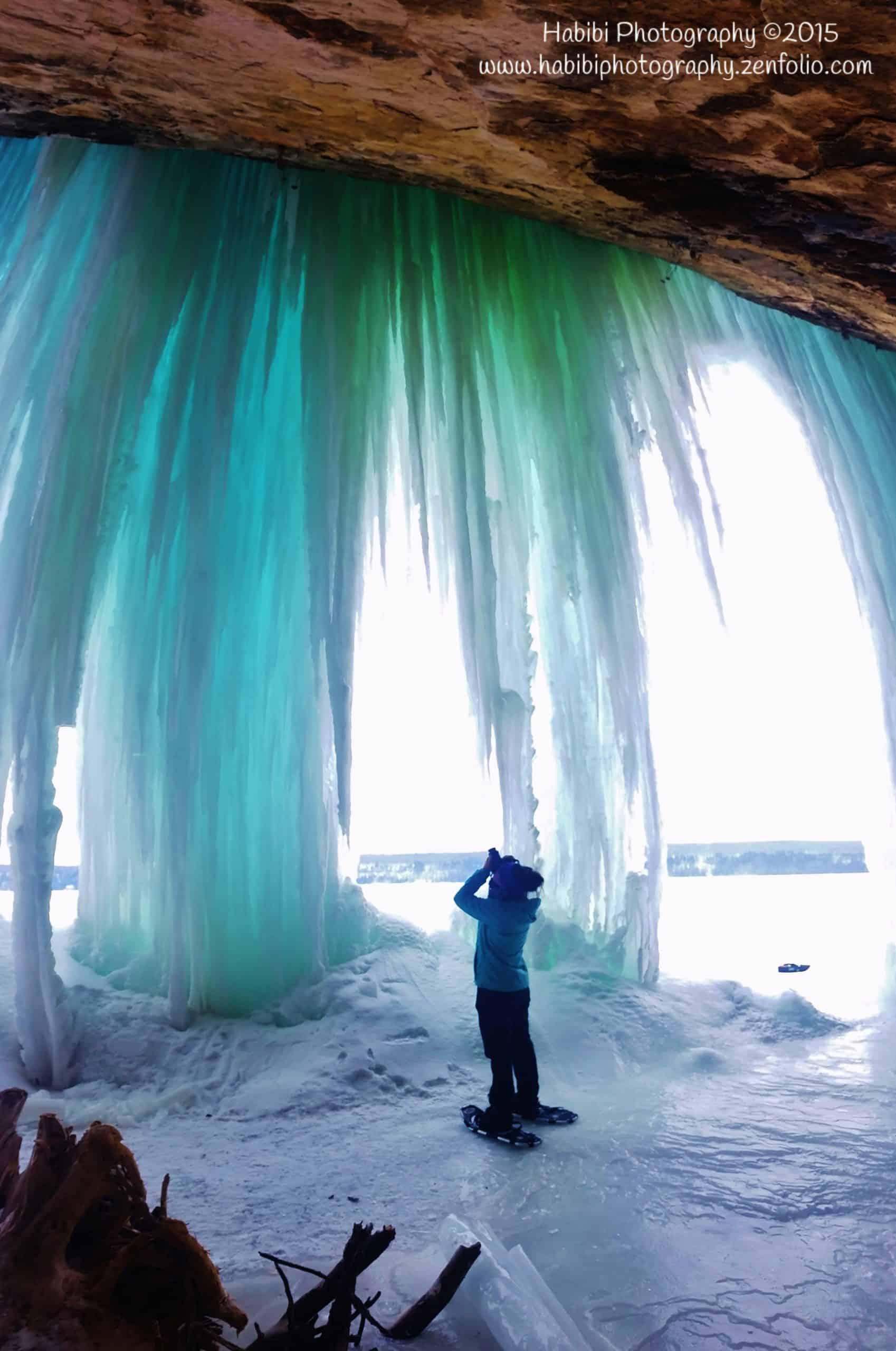 But Grand Island, or at least its southeastern shoreline, harbors a seasonal secret that’s only visible to intrepid visitors who don’t mind crossing 3,000 (or more, depending on where you start) feet of Lake Superior’s icy, snowy surface: the Grand Island ice caves.

With all due respect to the fine folks of northern Wisconsin, these caves are far more accessible – at least for those of us in the central and eastern U.P. – and just as impressive as their counterparts at the Apostle Islands. They’re also a bit larger and more dramatic than the nearby Eben ice caves, although those boast their own subtle brand of beauty.

How to Get to the Grand Island Ice Caves 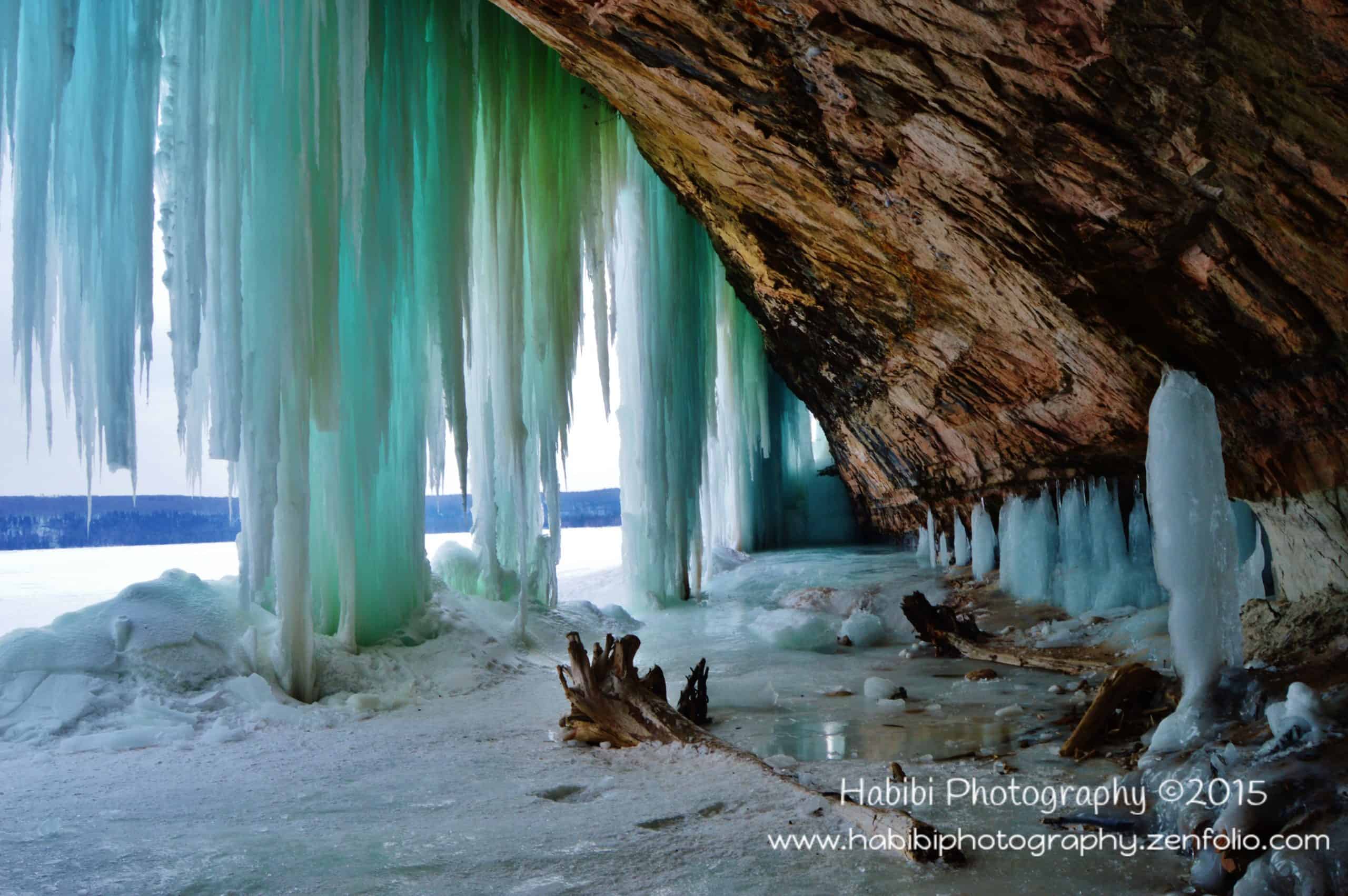 First things first: Let’s talk about how to get to Grand Island’s ice caves. From the intersection of M-28 and E Munising Avenue – the three-way flashing light deal – in downtown Munising, head east on Munising Avenue, towards the big ol’ Neenah Paper plant. (It’s by far the biggest structure in town, so if you miss it, you’re not paying attention.) Head past the plant, staying with the road as it curves left along the harbor.

After a sizable straightaway, right before the road begins a sharp uphill climb, bear left on Washington Street. You’ll follow this road past a lakeside neighborhood and medical complex, both on the left. After the medical complex, its name changes to Sand Point Road; just keep following it until you reach the National Park Service’s Pictured Rocks headquarters, a collection of stout buildings on a small peninsula. Park wherever there’s room – if it’s a busy day, you’ll probably be jostling for space with a few dozen other vehicles. 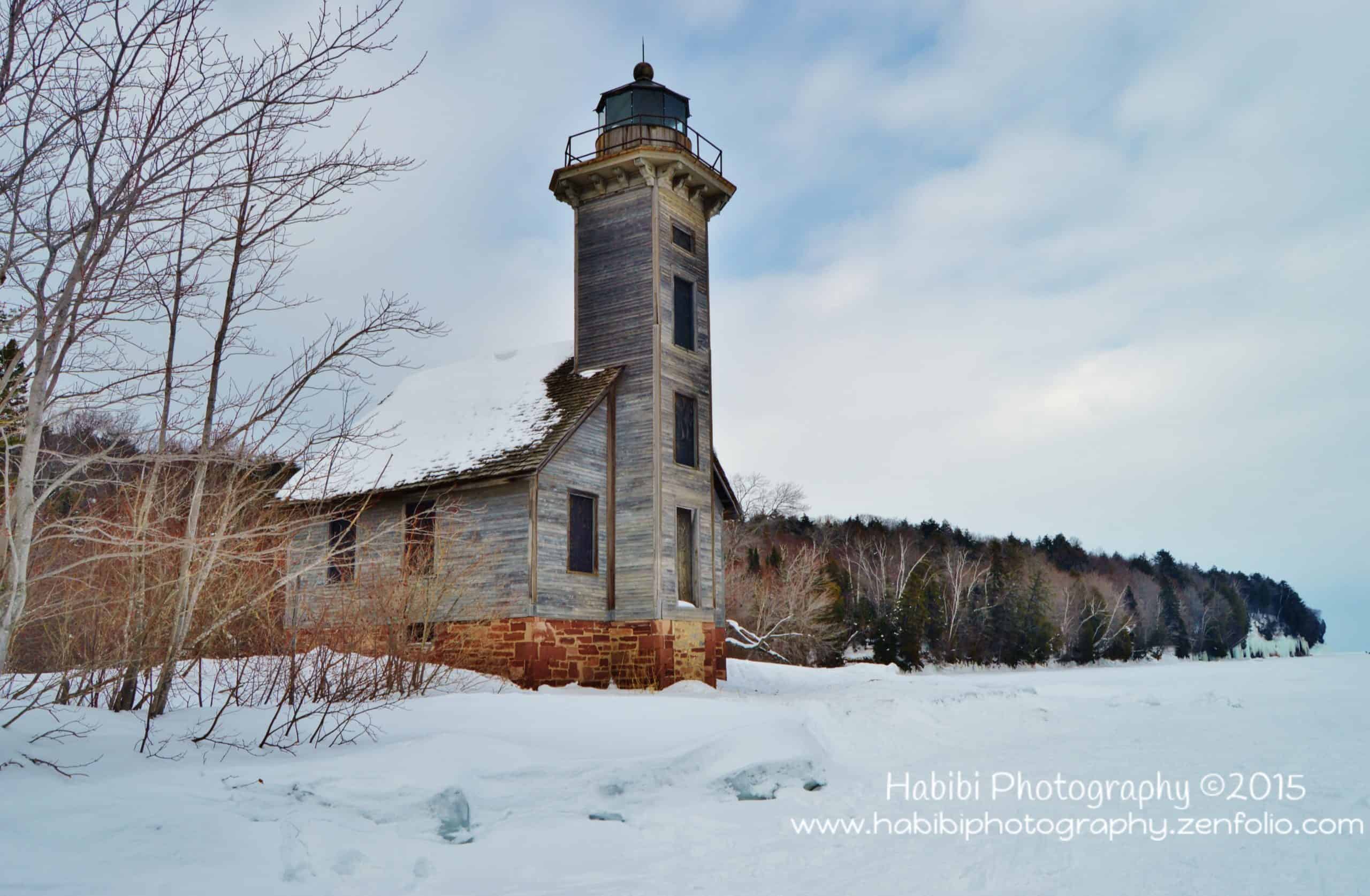 Now begins the fun part. The National Park Service is understandably reluctant to encourage visitors to walk, snowshoe, ski or snowmobile across nearly a mile’s worth of frozen lake, but it doesn’t do much to ward visitors off unless there’s a clear danger. As you walk to the northern end of the point, where you’ll drop onto the lake’s surface, look for “Danger!” signs or other obvious indications that it might be unsafe to cross the ice.

In their absence, point your boots (or skis, or snowshoes) towards the icy cliffs that should be plainly visible in the middle distance. From the shore, they won’t look incredibly impressive, but the ant-sized people that you see milling about their base – if you can see them at all – should give you an indication of their size. We didn’t bring any surveying equipment on our recent visit, but we’d estimate that the tallest formations exceed 80 feet in height. (You can judge our pictures for yourself.)

Pro Tip #1: No matter how hardened you are, walking across a snow-covered sheet of ice presents challenges. It’s likely that the ice will be covered with a substantial layer of snow that may vary in depth from place to place. Snowshoes, or at least high boots, would probably be helpful.

If you have access to a snowmobile, that might be a viable option as well. If you’ll be walking the old-fashioned way, take it slow and don’t expect to break the 3 mph barrier – walking through deep snow is tough work, after all, and the caves will still be there when you arrive.

Pro Tip #2: It may sound trivial, but you should aim for the midpoint of the cave complex (it spreads along a southwest-northeast axis). It’s a bit closer to the parking lot, and it offers some of the most dramatic formations of the lot. Once you get within a few hundred feet and the caves come into clear relief, you can decide whether you want to head northeast or turn southwest.

Crowds tend to be larger in the southwestern half, probably because the formations are a bit higher there, but the entire length is awe-inspiring. If you’re rocking a snowmobile, feel free to disregard this bit of advice – the poor souls trudging cross the ice on foot will be eating your dust (or, more literally, snow).

Pro Tip #3: You’ll be walking across a narrow outlet for Munising’s harbor between two elevated points of land. It’s almost guaranteed to be windy…really windy. Bring face protection, even if it’s relatively warm when you visit, and mentally prepare yourself for some stinging abuse.

Okay, so you’ve arrived at the ice caves and you’re tired from slogging across the snow. Good – you’re just where we want you.

First, take a look back across the frozen wastes. To your south, the hills that ring Munising’s harbor dwarf the town below. To your north and east, the colorful formations of Pictured Rocks stretch along the lakeshore to the vanishing point.

Now look back towards the caves themselves. Above the sheer ice faces, rocky, tree-covered hillsides jut up and out of sight. At their base, slick pools of refrozen meltwater mingle with piles of snow and broken ice.

Remember, the freeze-thaw cycle – especially in late winter, when the sun is strong enough to melt ice even when it’s well below freezing – is constantly reshaping these formations. If you return on three successive weekends, chances are good that you won’t recognize much of what you see on the caves’ faces.

For an intimate look at nature’s awesome power, sidle up to one of the columns and peer into its core. Expecting a solid tower of frozen water? Not a chance. These columns, especially the newer and/or sun-exposed ones, are actually made up of tiny beads and icicle-like formations separated by vertical channels that allow water to pass through them. It’s one of those mind-numbingly complex natural things that’s simultaneously random and orderly – kind of like a geode, but mostly frozen and not quite as colorful.

Inside, things are a bit more stable – and a whole lot more interesting, if that’s possible. For starters, many of the “entrances” to the caves are little more than elevated holes between solid ice columns. Depending on how the caves have set during the weeks leading up to your visit, you may have to scramble up a mound and squeeze yourself through an opening to actually gain access. (Clip-on crampons might be a good idea.)

Once you get in, be careful, both for your own physical safety and for the integrity of the caves themselves. The floors are often mirror-smooth, making regular walking a major challenge. Meanwhile, the ceilings can be low and/or spiky, and some of the most intricate formations – the fuzzy, mold-like bits of “shaved” ice that project from the bare rock of the walls and ceilings – are extremely fragile. Don’t be the guy or girl who ruins a particularly awesome formation for everyone else – those things don’t reform in their original states.

Since the caves’ outer walls aren’t comprised of a single, solid curtain, and blockages abound, you’ll have to enter and exit several times to get the full measure of their interior spaces. Be careful each time you do; in particular, don’t lean on any dubious-looking columns. Ice is heavy, and you’ll probably see the chilling remains of spectacular collapses. You don’t want to be under an unsafe formation when it goes.

Don’t rely on advice from people who have come before you. The caves don’t exactly change before your eyes, but they do shift over longer periods of time – and especially from year to year. Don’t expect to see specific formations, light patterns or interior configurations. You’ll like what you find, no matter how it looks.

Last thing. TAKE PLENTY OF PICTURES. The ice caves return every winter, but they’ll never be exactly as they were when you visited – there are too many variables in play, and water is an unpredictable beast. It’s far better to clutter your phone or DSLR with too many pictures of the same icicles, columns and beads than to regret not having any to show your kids.

Bottom line: The Grand Island ice caves are a true winter treat near one of the U.P.’s signature attractions (Pictured Rocks). Including the walk across the lake, plan on devoting at least 90 minutes to your adventure – and remember to snap plenty of photos.

More to Do in Michigan in Winter

There are many more things to do in Michigan in winter. For instance, you could visit family-friendly winter vacation destinations in Michigan or take a polar express train ride in Michigan during the holidays.