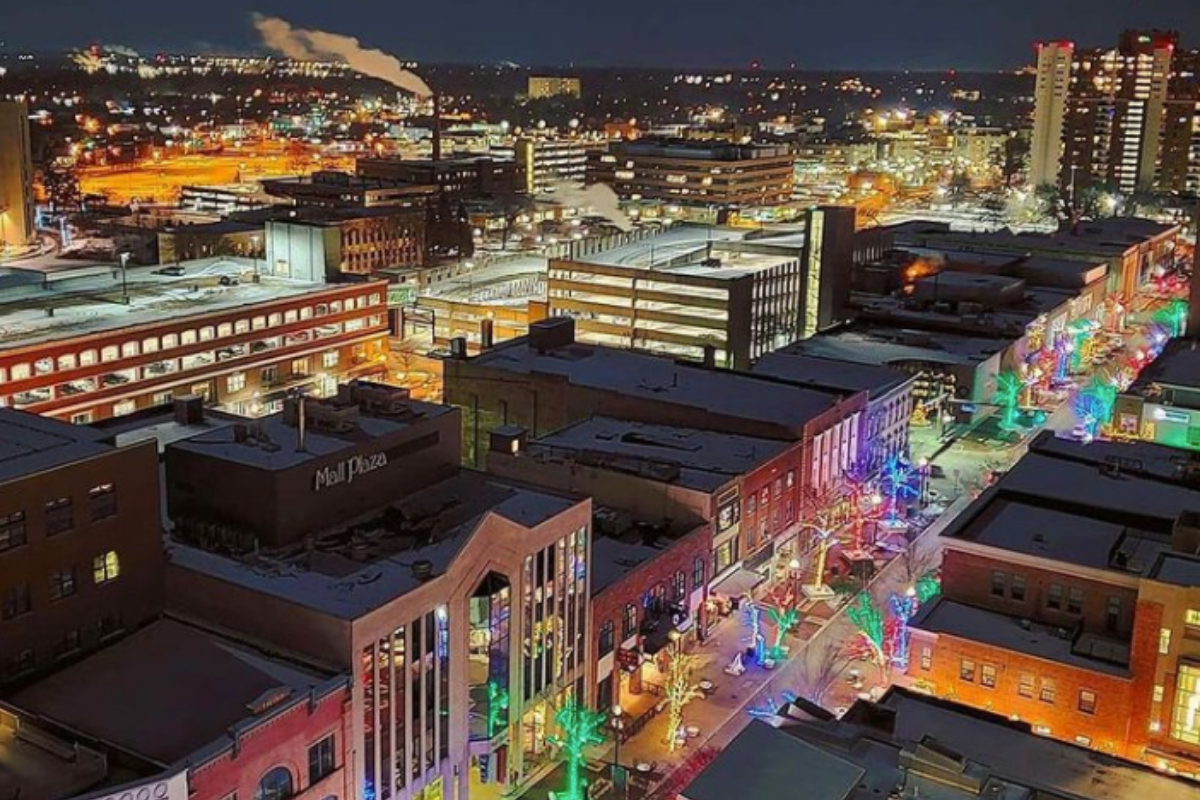 Kalamazoo Michigan (located in southwest Michigan) is rich in culture, civil rights heritage, and innovation. I spoke to several residents to gain a deeper appreciation, and Kalamazoo’s history is incredibly fascinating.

Want to know one of the most interesting tidbits of Kalamazoo history? That wasn’t the city’s original name! It was originally called Bronson.

One of the first white settlers of the area, Titus Bronson, named the town in 1831 after himself. He literally was the person who first put this city on the map. Or more so his bad behavior, which got him chased out of town.

It was then that residents later renamed the town Kalamazoo in 1836 to reflect the Native American heritage of the city.

The name Bronson can still be seen around town. Bronson Park, for example, is situated in the heart of downtown. It remains as a landmark of where Titus built his cabin. The city’s Level 1 trauma hospital, Bronson Hospital, bears his name as well.

2. Kalamazoo played an active role in the anti-slavery movement.

The abolitionist movement is an important part of Kalamazoo’s history. In nearby Schoolcraft, the home of Nathan Thomas was a stop on the Underground Railroad.

Nathan Thomas was Kalamazoo’s first physician and a founder of the Michigan Republican Party. Between 1840 and 1860, Thomas and his wife helped 1,000-1,500 slaves escape the cruel bonds of slavery.

Abraham Lincoln only graced the soil of Michigan once in his life. He did so on August 27, 1856, right in Bronson Park.

While he was campaigning (not for himself), the thrust of his speech was about restricting the expansion of slavery into the new territories. Applause erupted at the end of his oration.

Later, as Lincoln himself became president, he would take this passion of his a step further and move to abolish slavery altogether.

4. Kalamazoo was home of the Checker Taxi Company.

Manufacturing has long been part of Kalamazoo history. Did you know that Checker Motors Corporation called Kalamazoo home until their last car rolled off the line in 1982?

Checker cabs were visible more than just on the street. The fleet of cars used in the sitcom “Taxi” was from the Checker Motors Corporation.

Kalamazoo Valley Museum displays one of these cars on their second floor, and the Gilmore Car Museum in nearby Hickory Corners has a 1923 model – the first cabs Checker built in Kalamazoo – on display.

5. Gibson guitars were once crafted in Kalamazoo Michigan

Gibson guitars are an icon in the music industry. The Les Paul, the Flying V and B.B. King’s “Lucille” were all crafted in Kalamazoo, Michigan.

While Gibson moved to Tennessee in 1984, some of the workers stayed behind and opened Heritage Guitars in the old factory at 225 Parsons Street.

In 2021, an announcement was made that REVERB by Hard Rock would be “built on the renowned Gibson Mandolin-Guitar Manufacturing Company site, keeping a keen eye on maintaining the historic parts of the property.”

6. Kalamazoo is known for its craft beer.

Michigan is home to some of the greatest craft brewers in the country. Pioneer Larry Bell may be the one to thank for that.

When Bell started selling craft beers in the 1980s under the name Kalamazoo Brewing Company, he was the first to do so east of Colorado. Bell served his first brew out of a 15-gallon soup pot.

The brewing company moniker later changed to Bell’s Brewery, renamed after the founder, and is one of the stops on our recommended Kalamazoo Brewery Tour!

7. Kalamazoo Michigan was home to the first outdoor pedestrian mall.

The national designation as “Mall City” is an important part of Kalamazoo history. Kalamazoo was home to the first outdoor pedestrian mall.

Motor vehicles were prohibited from certain sections of Burdick Street to encourage an urban atmosphere. The opening of the mall in 1959 drew over 50,000 spectators.

8. Kalamazoo’s name has seen its share of cultural references.

While the exact meaning of the word Kalamazoo is unknown, it does have a verbal appeal.  Dr. Seuss and Carl Sandburg both utilized the name in their literature. Credence Clearwater Revival mentions Kalamazoo guitars in the song, “Down on the Corner.”

Perhaps most notable is the song “I’ve Got a Gal in Kalamazoo” by Glenn Miller. It was the best-selling record in 1942, spending multiple weeks at number one on the charts. It also received an Academy Award nomination for best original song in the movie, “Orchestra Wives.”

9. Kalamazoo has a history of medical innovation.

While Homer Stryker gained his medical degree from the University of Michigan, he returned to his hometown of Kalamazoo to practice medicine. During that time, he invented the oscillating electric saw. It had the ability to make a shortcut to remove casts, without damaging the skin.

The patent still exists on the “Stryker Saw” and is the standard in cast removal. He also developed the concept of a movable hospital bed frame.

Stryker Corporation is still located in Kalamazoo, and Western Michigan University named their school of medicine after him.

10. Pills are easier to swallow because of Kalamazoo Michigan.

Another medical pioneer in Kalamazoo history is William Erastus Upjohn, who invented pills that were easily digested. This huge success led to the development of a pharmaceutical industry bearing his name.

Upjohn’s further medicinal advancements included the development of Prednisone and Motrin. Later Upjohn was purchased by New York-based Pfizer, which still employs thousands of people in the local Kalamazoo area.

What interesting historical facts about Kalamazoo did we miss? Tell us more in the comments! 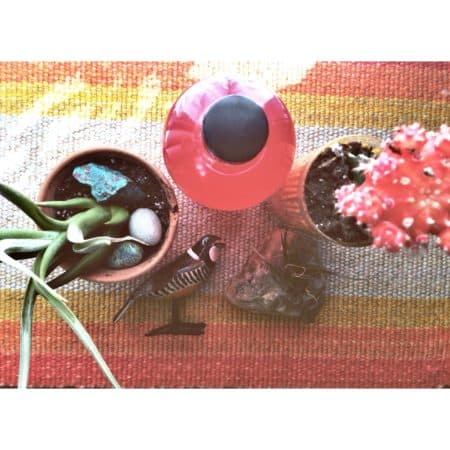 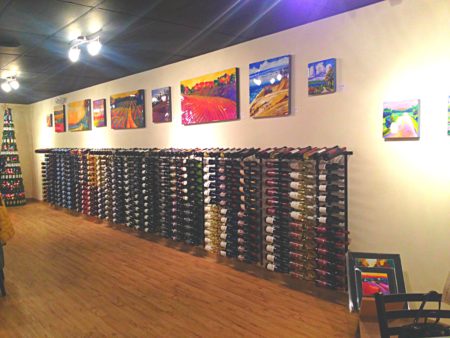 After a successful first year at their original Shelby Township location, Michigan By The Bottle Tasting Room has officially opened the doors on a… 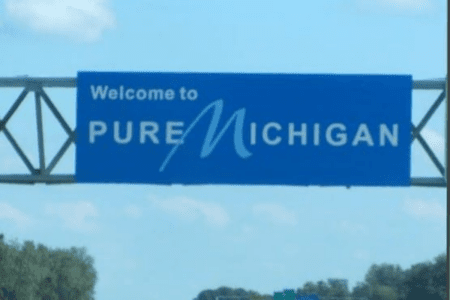 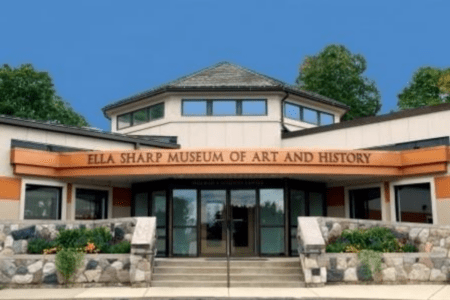 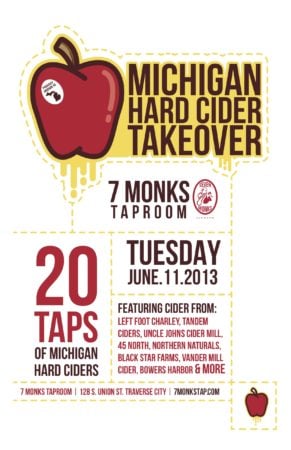 On an average day, 7 Monks Taproom proudly displays 46 taps for customers to ponder over and choose a delicious beer from. On Tuesday,…