After watching a FANTASTICALLY entertaining Great Lakes Loons game, I feel inspired to continue this high; I think I’ll watch a popular baseball movie like The Sandlot, Field of Dreams, or For Love of the Game (after all, it is about a Detroit Tigers pitcher, albeit a fictional character).

Why do I feel so inclined to watch classic baseball films you might ask? It’s not ALL about Kevin Costner. The Loons game my family and I attended on July 3, 2022, had a movie moment ending that reverberated throughout the entire Dow Diamond stadium!

Let’s start at the start. Dow Diamond is a Minor League baseball stadium located in Midland, Michigan. It is the home of the Great Lakes Loons, which are affiliated with the Los Angeles Dodgers. The pristine stadium opened in 2007, it features suites and a kids’ area (absolutely genius).

For the current season, the average price of tickets is around $43 but they start as low as $20. My family and I purchased our tickets at $20 and sat right behind home plate and next to the Loons dugout – great seats! I recommend buying directly through the Dow Diamond website. I saw higher prices for the same section on third-party ticket sellers’ sites.

Dow Diamond is extremely family-friendly for many reasons. Oh, let me count the ways! First (base 😊), every Sunday home game, children ages 12 and under get a voucher good for a free hot dog, chips, and 12 oz. soft drink.

Third (base 😆), Dow Diamond has a playground called ‘Lou E’s Lookout’ just off of right field and behind the lawn seat section. What a game changer. In the future, I may consider getting lawn seats with my littles since it is conveniently located by the play area but of course, the downside would be having to haul a blanket and/or lawn chairs. Hmph.

‘Lou E’s Lookout’ is affectionately named after the team mascot and Ambassador of Fun, Lou E. Loon. He is a spirited bird who loves to dance at home games… and maybe even pick up chicks… after he caught me taking several pictures of him, I’m pretty positive he made hand gestures at me to give him a call! Indeed it was all in good fun! Still, I was a bit flattered. After all, Lou E. does lead fans in his signature cheer, the “Funky Feather,” which won “Best In-Game Promotion of the Year” in 2009 for Minor League Baseball.

Dow Diamond opens an hour before the first pitch and those Sunday home games start at 1:05 PM. If you do have kiddos in attendance and you really want to pay attention to the game, I recommend going early to get their free kid meal (picnic tables are located by the play structure) and use a clean plate as an incentive for them to get to ‘Lou E’s Lookout.’

This way, much of the playground hype is out of their system before the game even starts. We went this route and my kids were able to sit rather contentedly (other than a quick search for Dippin’ Dots) until the 7th inning stretch without pleading to return to the play area. Heads up, ‘Lou E’s Lookout’ does shut down by the top of the 9th inning.

‘Lou E’s Lookout’ can become packed full of children. Rest assured that 4 to 6 staff members are always dedicated to the play area. It’s nice having some extra eyes on that line for the tallest slide. DANG, kids can be ruthless! Thanks for the assist, Dow Diamond crew.

Well, that covers all the bases. On to the exciting details and game stats!

The Dayton Dragons started strong scoring 6 runs by the end of the second inning, while the Great Lakes Loons couldn’t get any runs in until the third inning. The Dragons maintained their lead on the Loons right up until the very end. It was brutal to watch.

By the start of the 4th inning, the Loons were on their third pitcher. The team was struggling. In fact, the Loons loaded the bases and failed to bring any runs in TWO DIFFERENT TIMES.

Between the Dragons dominating and the sweaty heat of the day, it was tempting to leave the game early. However, the Loons refused to give up, which kept fans sticking to their seats (literally and figuratively).

Entering the 9th inning the score was 8 to 5, Dragons. The Loons were able to keep the Dragons from scoring any more runs before their final at-bat. So, out came ‘Rall E. Camel,’ the team’s second mascot. He is an honorary deputy ambassador of mischief and downright wacky; just what the fans and team alike needed to get pumped up!

Here’s proof that Rall E. Camel’s antics worked. For the third time in the game, the Loons loaded the bases with 2 outs. Aldrich De Jongh approached the plate. One can only imagine the pressure he must have felt and at 3 balls and 1 strike, it seemed likely he would crack under said pressure. BUT. HE. DID. NOT.

Aldrich De Jongh hit the first walk-off grand slam in Great Lakes Loons’ history, and the third Loons slam in the last four games. Turns out this was De Jongh’s first hit back off the injured list as well. Not much else gets closer to a movie magic moment than that! Dow Diamond went wild!

This shocking conclusion to the game made running the bases for my family all the more exciting. What a game! Now you can appreciate my strong desire to binge-watch baseball films; I’m just trying to keep this good feeling going until we can get back out to Dow Diamond. Which, ahem, we already bought our tickets… GO LOONS!

Currently, Hinkle is somewhat deviating from her area of expertise while continuing to explore creative processes as a content creator. Hinkle is especially excited for this change because the material of focus happens to be something she feels a great deal of passion for – the state of Michigan! 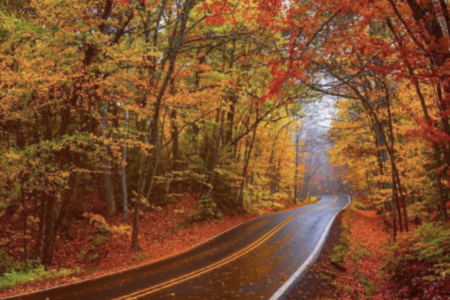 The Keweenaw Peninsula has such a vast amount of breathtaking scenery that it can be overwhelming to decide where to go first. You might…