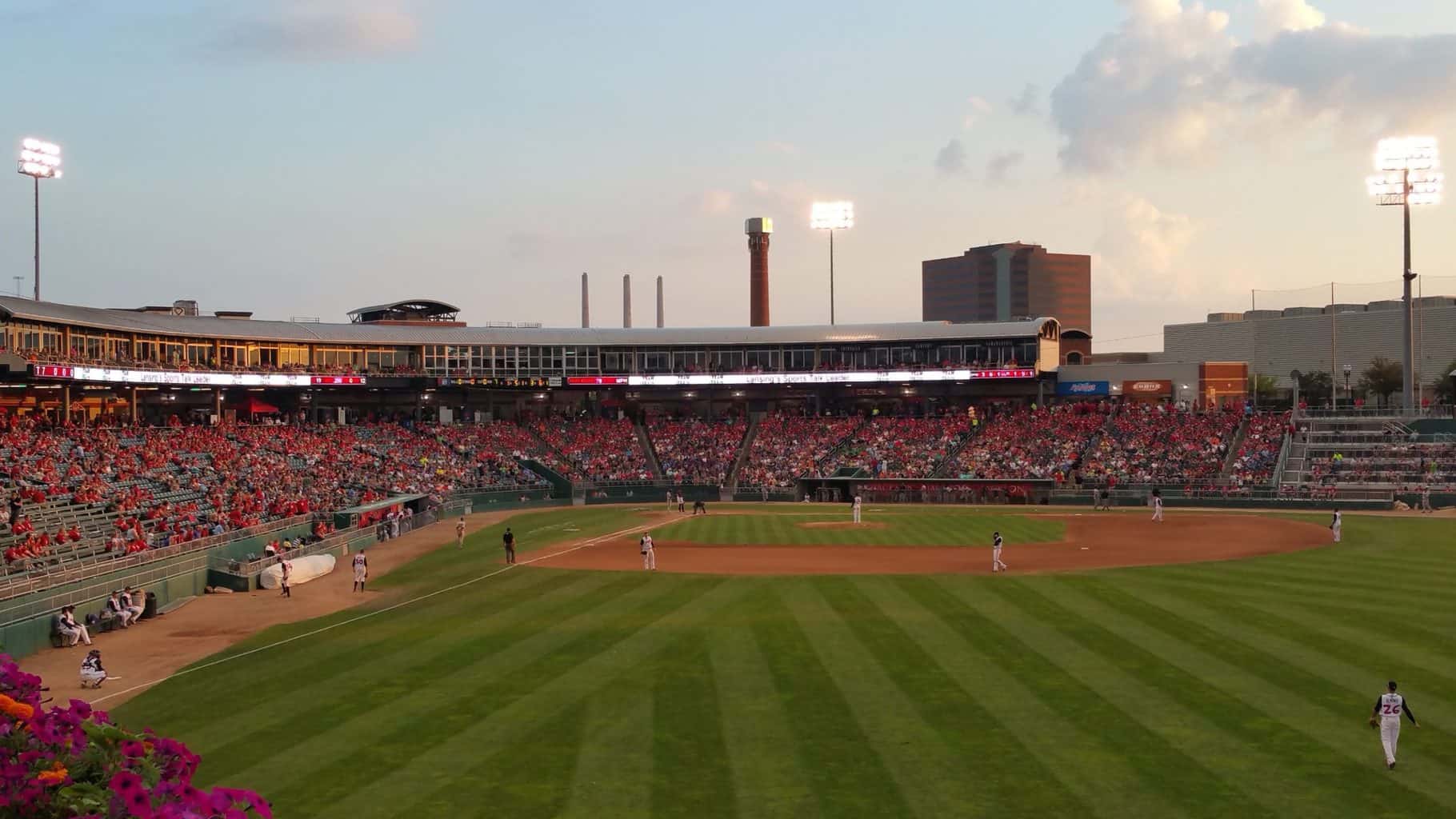 As I explored during my Mitten Trip guide to Lansing, the capital city has an abundance of indoor and outdoor dining and entertainment options to choose from each summer weekend. However, there’s really only one option that combines the best of all of those into a format that’s accessible to nearly everyone: An evening at a Lansing Lugnuts minor league baseball game.

With most games starting around 7:00 p.m., Jesse Goldberg-Strassler, media relations and radio broadcaster for the Lugnuts, suggests dinner and a game as the perfect way to start the weekend. He points to how “the food is a high enough quality and the prices low enough that you can enjoy a whole night with us.” After my visit I have to agree, but I also found much more to love about spending an evening at Cooley Law School Stadium.

Here are my top seven reasons why a Lugnuts game is the best deal in Lansing:

When trying to decide which game to buy tickets for, there’s not usually a question of whether or not there will be a special promotion. The question is which promotion—or promotions—will be happening that particular night. Goldberg-Strassler explains, “In other places, you’re drawing basically the same crowd every night. We want to give different people a different experience.”

Without the constant interruptions and delays for commercial breaks like the big leagues, game play moves much quicker in the minor leagues. To allow the players ample time to transition and to keep the fans engaged, the on-field emcee provides entertainment between every half-inning. Whether it’s beach balls in the crowd, name-that-tune trivia, or a little friendly competition between MSU and UM fans, there’s always a reason to stay at your seat and keep your eyes on Jackson Field. Of course, it helps that the Lugnuts are pretty good, too!

For kids who want to get up and move during the game, the stadium features a permanent play structure, as well as several inflatable structures on game days. For adults and kids alike, the Michigan Baseball Hall of Fame will be opening August 6, 2015, in left-center field.

Like at most other stadiums in the country, Cooley Law School Stadium vendors serve hot dogs, pizza, pretzels, ice cream, sodas, and domestic beers on tap. Unlike most others, the stadium also features Greek and Italian cuisine vendors, a bar area dedicated to craft brews, all-you-can-eat picnic-style meals in select areas, and sit-down restaurant style meals in the modestly priced suites.

Not only are the options plentiful, but the pricing is reasonable as well. For a family outing or a cheap night out, tickets start under $10 each for lawn and standing room seats. However, unlike many large stadiums with limited standing areas, Cooley Law School Stadium has large swaths of grass surrounding the outfield that you can bring a blanket to spread. Outside food and beverage are not allowed, but several vendors have modestly priced options, especially on Dollar Deal Days.

The most expensive individual ticket will run you around $30 each (roughly the same price as a bleacher seat at a major league game), but it includes café-style seating at the Pepsi Porch along the third-base line and access to all-you-can-eat barbecue chicken, pulled pork, fresh fruit, and other tasty summer staples.

The most luxurious individual tickets will get you into The Clubhouse suites for under $25 each. This includes a premium reserved seat behind home plate, plus café-style indoor seating and access to a full-service bar. The Clubhouse also features a full kitchen with a constantly expanding and evolving menu that could rival some restaurants outside the stadium gates.

Everything about the Lugnuts organization is focused on being local, right down to the naming rights of the facilities. Cooley Law School Stadium is named for the Thomas Cooley Law School (now affiliated with Western Michigan University), whose flagship location is just across the Grand River from the stadium. Jackson Field is named for Jackson National Life Insurance, whose national headquarters are just inside the border between Lansing and Okemos.

Stadium capacity is less than 14,000 (about 1/3 the capacity of Comerica Park), which makes for less crowding, shorter lines, and less struggling to find a parking spot, restroom, or food vendor. The smaller bowl also means that even the farthest seats are still right on top of the action, and the players even come out to the stands to sign autographs before every game.

Regardless of the outcome or excitement, you won’t see many fans heading out to the parking lot before the end of a Friday or Saturday night game. Weekend games are notorious for their post-game fireworks show, sponsored by yet another local company, Lansing Automakers Federal Credit Union. The show is a little smaller than what you’ll typically see on the Fourth of July, but when you’re mere feet from the action, and you get to see them every weekend, it’s just plain fun.

Minor league baseball teams are in the precarious position of never knowing when their players might be sent back and forth from their major league affiliate. With that sort of uncertainty, it’s difficult to make a superstar the face of the team. So the Lugnuts turned to a seven-foot purple dinosaur with shaggy red hair, walrus teeth, and lug nuts for nostrils. Before and during the games, Big Lug can be seen dancing, waving, hugging, and occasionally “helping” the grounds crew.

Between games and seasons, Big Lug is an important part of the Greater Lansing community. There is no charge to request his attendance, but he is not available for private functions. Mostly, Big Lug attends schools and charity functions. “There are so many places he gets invited just to be a visible part of the community,” Goldberg-Strassler says. “Big Lug is Lansing, and Big Lug should be around Lansing—not just at the ballpark. We love the community just as much as the community loves us.”

Why do you love the Lugnuts? Let me know in the comments! Read more about the Lansing Lugnuts, my Mitten Trip to Lansing, or other Mitten Trips in other cities.

Fall time means many things, but one thing is for sure: Fall means football, and if you live in Michigan, football is a big…

Cruising along the waterways of Michigan and needing a bite to eat? Don’t miss these boater friendly restaurants on Lake Michigan. Michigan is home…

Mackinac Island has many rock formations, but the most famous and unique of them all is Arch Rock.  It stands 146 feet above Lake… 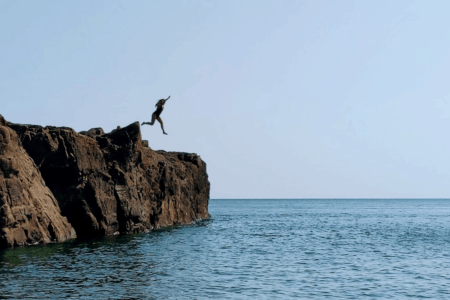 Cliff Jumping at Black Rocks is an amazing experience and you’ll definitely want try it!

Have you ever opened the curtains on a beautiful spring day in Michigan and thought, “What do I want to do today?” The answer… 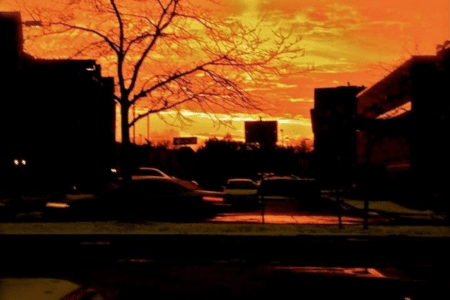