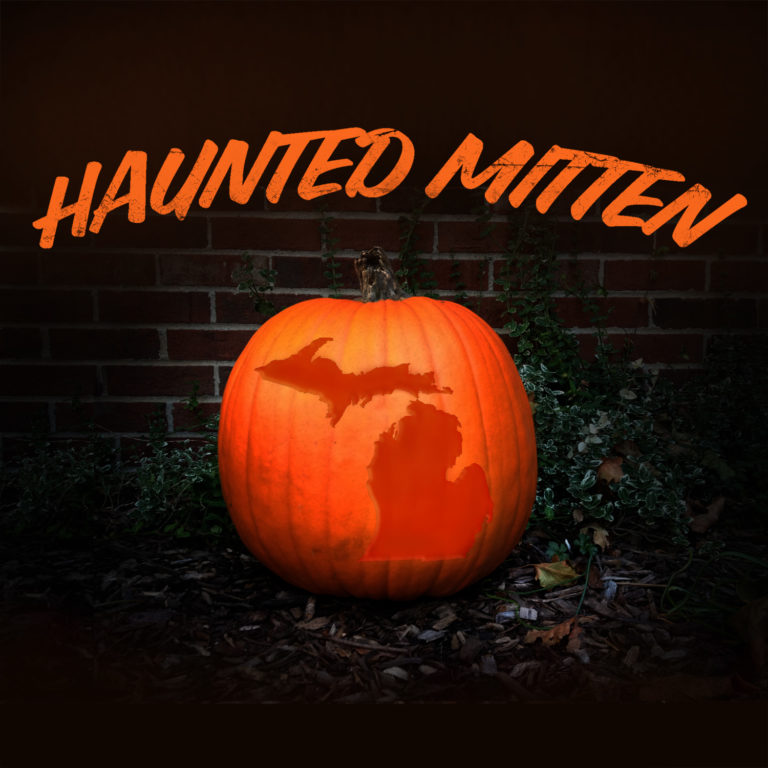 A dirt path leads to a cemetery, covered with fallen branches and hung with cobwebs; a strange fog closes in while bats screech overhead; the howls of a black cat echo through the night as the sun sets on the Haunted Mitten. With Halloween approaching, Michiganders are searching for places to scare themselves silly, so here is our list of the ten most haunted places in the state.

1. The Traverse City State Hospital
Constructed in 1885 and closed over 100 years later, the Traverse City State Hospital is perhaps the most eerie place in Grand Traverse County. Originally an asylum for the mentally unstable, during its active years the hospital also housed those afflicted with tuberculosis, typhoid, diphtheria, and polio. Although the Gothic-style buildings have undergone renovations since 2000, a visit to the grounds conjures up the ominous and oppressive feelings of its past. Underground tunnels and caged balconies add to the spooky visual stimuli and, located on the trails behind the buildings, there is said to be a portal to Hell under “The Hippy Tree”. As well as documented paranormal investigations, the State Hospital has several books dedicated to its disturbing history.

2. Old City Orphanage in Marquette
Formerly known as the Holy Cross Orphanage, the Old City Orphanage stands against the Marquette hills as a menacing reminder of the city’s past. Built in 1915 and abandoned in the mid-sixties, the Catholic orphanage remains a location of lengthy narrative and legend. According to occupants of the orphanage, the nuns were known to physically and mentally abuse the children and were fierce in their punishments. One account recalls a little girl playing outside during a blizzard and subsequently catching pneumonia. She died several days later. As a testament to her foolishness and a warning to the other children, the nuns put her body on display for all to view. The crying of children is said to be heard if passing the building on a quiet night.

3. Henderson Castle in Kalamazoo
Over a century old and supposedly host to a legion of ghosts, Kalamazoo’s Henderson Castle is now a bed and breakfast that caters to the living… and the dead. The ghosts of the home’s original owners Frank and Mary Henderson, as well as those of a Spanish-American War veteran, a little girl, and a dog interact regularly with paranormal teams and guests alike. The apparently amiable spirits have favorite forms of communication, speaking through unplugged radios, tapping unsuspecting visitors on the shoulder, and sometimes appearing in full form, wearing period clothing. 4. The Masonic Temple in Detroit
Built in 1912 by a wealthy gentleman named George D. Mason, the Detroit Masonic Temple has over 1,000 rooms, and several secret staircases, concealed passages, and hidden compartments in the floors. Mr. Mason went slightly overboard when financing the construction of the building, and eventually went bankrupt, whereupon his wife left him. Overwhelmingly depressed about his financial and personal circumstances, Mason jumped to his death from the roof of the temple. Security guards claim to see his ghost to this day, ascending the steps to the roof. The temple, abundant with cold spots, inexplicable shadows, and slamming doors, is known to intimidate visitors with the eerie feeling of being watched…

5. Felt Mansion in Saugatuck
Felt Mansion, located on the Mitten’s west coast between Holland and Saugatuck, has worn several masks since its construction in 1928. The mansion was originally a gift to inventor Dorr Felt’s beloved wife Agnes, who died shortly after the Felt family moved in. After they left the home, it was transformed into a seminary, and then a police and drug enforcement agency office. It is presently being restored to its former glory. Homes with such rich history rarely remain quiet:  many believe that the spirit of Agnes Felt wanders the house she was never able to enjoy in life. A shadowy figure waltzes around the ballroom frightening the mansion’s tourists, while heavy doors open and close of their own accord. There are even accounts of Agnes reprimanding guests whom she has deemed to be too offensive or crude in her presence.

6. Michigan Bell Telephone Co. in Grand Rapids
Shrouded in legend, the Michigan Bell Telephone Company stands on the grounds of what was once a lavish mansion in downtown Grand Rapids. Current employees often experience ghostly encounters due to the grisly history of this particular plot of land. It is said the Randall couple purchased the Judd-White House from its previous owners and hadn’t lived there for long before tragedy struck. Warren Randall, a railroad brakeman, lost his leg while on the job and had it replaced with a wooden prosthetic. This led to feelings of insecurity on Warren’s part, and he soon accused his wife Virginia of having an affair. Their marriage was no longer happy and arguments were often overheard from the street. After noticing a pungent odor emanating from the mansion, workers in the building next door contacted officials to investigate. The two were found dead in the house; Warren had allegedly beaten Virginia to death with his wooden leg before slitting his own throat. The ghosts of the couple argue to this day as witnessed by employees of the company, with some saying that the Randalls are responsible for eerie prank phone calls traced back to the building after hours.

7. River Raisin National Battlefield Park in Monroe
The largest and bloodiest encounters fought on Michigan soil, the Battles of River Raisin (also known as the Battles of Frenchtown) were devastating upsets for the United States during the War of 1812. After several days of combat and an eventual surrender to the British, Americans soldiers were lead away by their captors. The maimed soldiers were abandoned, and would later be massacred by Native Americans in a surprise attack. In this deadliest battle of the War of 1812, over half of the total of 1,000 American soldiers lost in the War were killed. Paranormal teams have held investigations at what is now known as the River Raisin National Battlefield Park and have utilized the Singapore Theory which employs the use of time-oriented objects, music, and other triggers to encourage the appearance of ghosts. Figures in doorways, windows, and on the field have been photographed, and supposed sounds of war and cries of agony recorded.

8. The Paulding Light
Paulding, Michigan, is a small town in the Upper Peninsula known for a mysterious light display that occurs along a stretch of Highway 45. Although numerous paranormal investigators and even the Ripley’s Believe It or Not team have examined the area, no explanations for the phenomenon have ever been found. Locals say the small spherical lights of white, red, and green are the ghosts of a railroad worker who died while trying to switch the tracks, or of a Native American man dancing along the power lines.

9. Pere Cheney
Located near Grayling, Pere Cheney was once a bustling nineteenth century sawmill village. Diseases like diphtheria and cholera ravaged the town and the population dwindled to double-digits before the town was eventually abandoned some time after 1912, when the Post Office closed. Legend has it that nothing but a strange moss grows in the village, and the cemetery, one of the very few remaining landmarks, may even hold the bones of a witch. Many visitors hear voices and witness orbs and, perhaps most frighteningly of all, there are reports of sightseers finding hand-prints on cars from children who died in the area.

10. Mackinac Island
Thought to be the most haunted place in the Awesome Mitten, Mackinac Island has tours devoted to its most ghost-ridden locales. From the Grand Hotel (built upon the first military post’s cemetery) to Fort Mackinac (explored by SyFy Channel’s Ghost Hunters) to Mission Point (haunted by the ghost of young man who shot himself after a heartbreak), Mackinac Island is a paranormal investigator’s dream destination. The occasionally bloody history and relative isolation of the island lends to its spooky atmosphere of this time of year.

Know of another spooky place in Michigan? Let us know in the comments below!