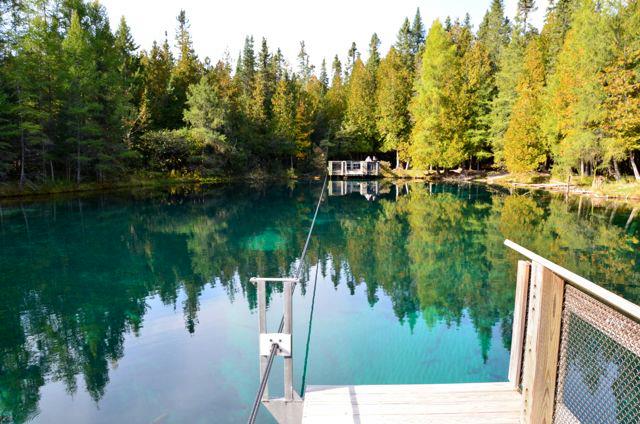 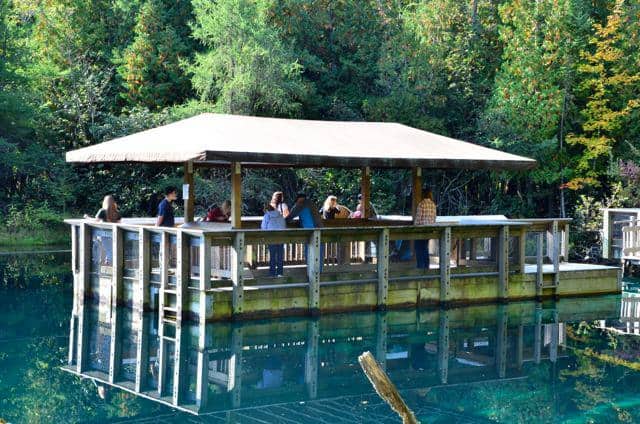 Kitch-iti-kipi (aka “Big Spring”) in Palms Book State Park is unlike any other attraction in the Upper Peninsula.

Just eleven miles north of U.S. 2 outside of Manistique, MI this 300-foot long by 40-foot deep natural spring has been a local claim to fame for more than a century. Some of the first settlers of the area floated over the spring on a primitive raft and local residents still come here to kickback. Nowadays, though, Kitch-iti-kipi is also the biggest tourist attraction in the area, and for good reason.

The bottom seems to glow with a light emerald green color as about 10,000 gallons of water per minute flow out from fissures in the limestone underneath the spring. As the water rushes out of the spring’s floor, sand bursts upward and then falls somewhere else, which means the floor of the spring is always changing.

The crystal clear water is filled with huge trout and as you float across the spring, with fish swimming below you and birds chirping in the surrounding trees, it almost feels like you’re on a Hollywood movie set. Interpretive signs on the shoreline show photos of what it was like “back in the day.”

Kitch-iti-kipi wasn’t always this pristine. It took the passion of a local businessman named John I. Bellaire and the cooperation of the state of Michigan and the Palms Book Land Company to turn it into the wonderful state park it is today.

Here are a few excerpts from the interpretive signs at Kitch-iti-kipi that I found interesting:

“When Europeans first arrived in the upper Great Lakes, the Ojibwa called the Big Spring Kitch-iti-kipi. The word is said to have many possible meanings including:

Whatever its name, Kitch-iti-kipi has drawn curious sightseers for decades.”

“The Manistique Tribune reported in the spring of 1910 that “the North Shore Lumber Company of Thompson had gone to the expense of placing a big raft on the “Big Spring” capable of carrying forty people.”

“Mr. John I. Belaire moved to Manistique from the roaring lumber town of Seney around 1920. As a well-known and respected figure, Bellaire’s passion for the spring, and desire to see it properly cared for, earned him much of the credit for its preservation as a Michigan State Park. Bellaire later recalled:

“The first time I saw the spring it was not more than a black hole mostly covered by fallen trees. A lumber camp (Camp 22) in the vicinity threw their rubbish into it. I could have purchased the land myself, but instead I made the contacts to have the State acquire it.”

“It was John M. Bush, land agent of the Cleveland Cliffs Iron Company who volunteered to approach the executors of the Book and Palms estate of Detroit with a proposal to make the Big Spring a State Park. Apparently, the deal was promoted by businessman John I. Bellaire, who ran a five and dime store in Manistique. Members of the Book and Palms families eagerly fell in with the suggestion and gave the property to the state. The deal transferred almost 90 acres to the State for one dollar. The deed stipulated that the property was “to be forever used as a public park, bearing the name Palms Book State Park.” 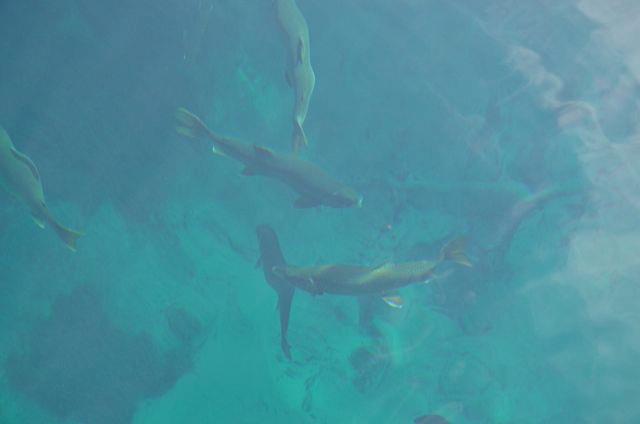 The opening in the center of the raft makes for excellent viewing.

Though you can see quite a bit from a viewing platform on the shore, the best way to experience Kitch-iti-kipi is on the large floating barge provided by the state. So, I hopped aboard.

It works like this: The raft (maybe 10’ x 20’ or so) is guided by a large metal cable, and propelled by a big wheel that someone on the barge must turn to move the raft ever so slowly forward, and then equally slowly back to the dock.

The raft is very easy to operate, but if you want to gaze into the spring the whole time I’d recommend NOT being the one turning the wheel. There will almost always be other people on the raft, though, so the polite thing to do would be to take turns so everyone gets a chance to have a look. (I’d heard something about a park employee being on hand to “drive” the raft, but no one was there on the day I visited, and I was told by a local who knows the area well that it’s up to the park visitors to man the raft.)

Luckily, I was able to peer over the edge and take photos the whole time. I even spotted a shiny silver coin way at the bottom, forty feet below the surface. The water is crazy clear, the fish are huge, and the setting is serene. Kitch-iti-kipi is a must-see.

Bottom line: Kitch-iti-kipi is truly something to see. The water is so clear that you can see to the bottom of this forty-foot natural spring with ease, and the huge fish swimming around really add to the experience.

Things to Know about Kitch-iti-kipi

Other things to note:

How to get there? For as popular as Kitch-iti-kipi is nowdays, you would think the path to get there would be well marked all the way from the highway. It’s not. Here’s what you do:

Since the Great Lakes are so large, the shorelines are a lot like ocean coasts and pose a danger for ships. Lighthouses line these…

I just got back from a two-hour hike at Piers Gorge, and man… what a place. The Gorge is quickly becoming one of my… 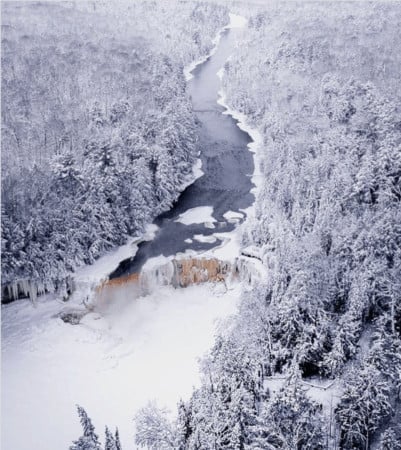 When I’m breathing underwater, my body is weightless and this vast, blue world is silent. As I float over rippled sand through prismatic…