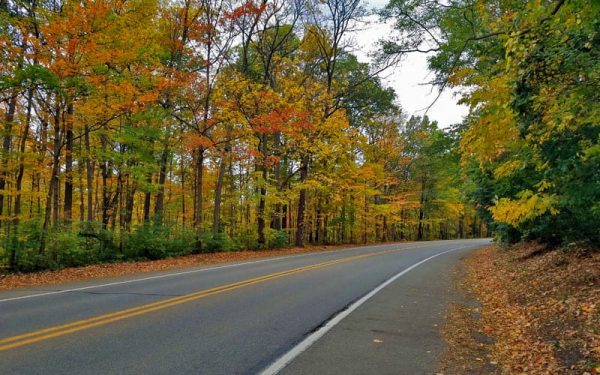 Autumn fun is in full swing in the mitten. Along with all the fun comes the colors of the season. When many people think of Wayne County in Metro Detroit, lots of houses, shopping malls, and urban sprawl come to mind. However, tucked away among all this is a 17+ mile curvy road and continuous park that is Hines Drive. This scenic east-west route will take adventurers between Dearborn Heights and downtown Northville.

This fall has been unusual weather-wise, but normally mid-to-late October is the optimal time to visit this part of the state.  It was during this time period that a mix of morning frost, cool temperatures, dark and clear skies, and dampness greeted me as I embarked along Hines Drive. It didn’t seem to matter what the weather was like, the fall scenery you can expect to see is beautiful.

I recommend starting your Hines Drive fall color tour at its entrance in Northville just off 7 Mile Road. You will immediately be in the woods and greeted with bright yellow on all sides. I stopped at the first parking opportunity on the left: the Northville West Recreation Area. This provides easy access to capture the colors from the road, as well as along the dirt road that you can follow to park.

Tip: Fall tends to be rainy. If you are going to ride Hines Drive right after a significant storm check the traffic report. Due to Hines’ low lying nature, flooding and partial closings are norms.

Less than a mile down, play some disc golf among the colors at the Cass Benton Hills Disc Golf Course. I have before, but on this day there was no one around so I just walked part of the course. Open spaces, large hills, and woods alongside the walking paths make for a scenic walk.

Continuing east and now in Plymouth, I parked at Wilcox Lake and hung out alongside the pier for my first taste of autumn along the water. My recommended Hines Drive spot to capture foliage by the water is at the Newburgh Lake Recreation Area further east in Livonia. I stopped at the two parking areas alongside Newburgh Lake to capture panoramic views and the waters shadows. Nankin Lake in Westland is also a must-stop.

I continued east until reaching Ford Road in Dearborn Heights where Hines Drive ends. With the speed limit being 40 mph along the entire route, it was definitely a slow paced, relaxing drive. I stopped at random spots the rest of the drive to grab pictures of playgrounds, picnic tables, and other scenes among the leaves. Bring the kids to enjoy all of the seasonal fun.

Being a cool day, I dressed warmly. During my self-tours I also warmed up with a pumpkin spiced latte at Espresso Elevado in the heart of Plymouth. I grabbed another one at Red Dot Coffee Company in Downtown Northville. Both are just a stone’s throw away from Hines. I recommend walking both downtown areas and the surrounding neighborhoods this time of year.

Is history your thing? As you pass through Westland near Farmington Road, you will find Nankin Mill. It’s a picturesque, old-school grist mill. It now serves as an interpretive center and is open to tour, free of charge, six days a week.

Tip: Come back to Hines Drive during the holidays to drive among all the lights at the Wayne County Lightfest.

View more of the Fall colors I captured and what you can expect to see while roadtripping Hines Drive in Southeast Michigan: