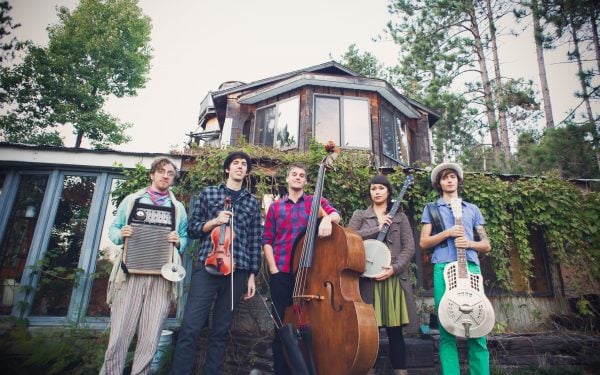 The Appleseed Collective: Making it up as they go along

The Appleseed Collective, an up-and-coming young band from the Ann Arbor area, was formed in 2010 by the “coincidental meeting” of Andrew Brown (guitar, vocals) and Brandon Smith (violin, mandolin, vocals). Something clicked: the band has just celebrated their two-year anniversary, have released a full-length album (this year’s Baby to Beast), toured extensively, and grown to a quintet, all while playing venues ranging from living rooms to The Ark – including a barn! In addition to Brown and Smith, the band’s members now include Vince Russo on washboard and vocals, Katie Lee on banjo and vocals, and Ben Ralston on upright bass.

They were one of the first live bands I went to see after moving to Ann Arbor, and I’ve followed their career since then with interest. Something I never realized until I got acquainted with Appleseed is just how much work it is to be in a band, especially when your band is a bunch of young folk with day jobs, schooling, and side projects on their minds. The Appleseed Collective do it pretty much all on their own, and their success is a testament to the hard work and love they put into their music.

Violinist/mandolinist/vocalist Brandon Smith was kind enough to answer a few questions via email:

Awesome Mitten: You guys have a unique old-time sound, which you describe on your website as a mix of Dixieland-bluegrass-ragtime-swing-blues. What’s it like to play this style of music as young folks? What drew you to this style?

Brandon Smith: We love this type of music. We get a lot of surprised reactions from people who don’t expect “young folks” to be into this music. [It] has a lot of spirit to it. It’s the real edge-of-reality-swinging-by-the-short-hairs-voodoo-hoodoo-make-it-up-as-you-go-along jazz. No joke.

AM: You sometimes collaborate with local businesses – for example, some band members appeared in a promotional video for The Brinery’s recent Kickstarter campaign. What does it mean to you to do this kind of collaboration? How do these experiences contribute to your work? Is it important for bands to be engaged in more parts of local life than just the music scene?

BS: I think collaboration is vital to a vibrant community. If we love what someone does, we want to see them succeed. We’ll do whatever makes sense to help them. We don’t have a lot of money, but we do have some fans with money and we can be a conduit – hook up person A with idea 3 and our community just got stronger. I think it’s everyone’s responsibility to share what they love, try to connect the dots, expand the harmony. The more we move the more we groove. That’s super cheesy but probably true.

AM: I’ve heard it said by a few people that Michigan music is going to play a large part in keeping this state on the national radar, and it does seem like a creative force is growing here, particularly in Ann Arbor and Detroit. What does it mean to you to be a Michigan band?

BS: I hope that’s true. Michigan is a great state for local musicians – it’s not exactly on an easy tour route for big acts, so it’s almost like the small guys get the chance to really experiment. We’re lucky in that regard. At the same time, our economy is in the dumps, which means it’s hard to get paid. Most musicians I know have committed to a life of poverty, or they’re still mentally holding out for that golden ticket. Michigan is a unique and beautiful state, both the land and the people. Nature fosters communion.

AM: I know you go on pretty extensive tours, not just in Michigan but throughout the Midwest and as far as Florida and the East Coast. What is the life of a touring band like? Any hilarious/scary/just plain weird stories from the road?

BS: Life on the road is full time action. More real than home time, the volume is turned up to 11. Dynamics are amplified, the moment gains more weight – there are no distractions available. It’s wonderful, and terrible. We eat really well, which is one of our band superpowers – storehouse of homemade granola, hummus, trail mix, tons of vegetables, all the good stuff.

One time we were sleeping on the couches in a host’s house and someone crawled into the couch with Andrew, farted on him and used his legs as a blanket. Andrew jostles this guy off, and he falls right on Vince’s face and exclaims, “HUMANS?!” It sounded like he had just seen a gopher using a power drill or something. He wandered off and the next morning nobody could figure out who he was.

Catch up with The Appleseed Collective on their website, where you’ll find music to listen to and upcoming shows to attend.