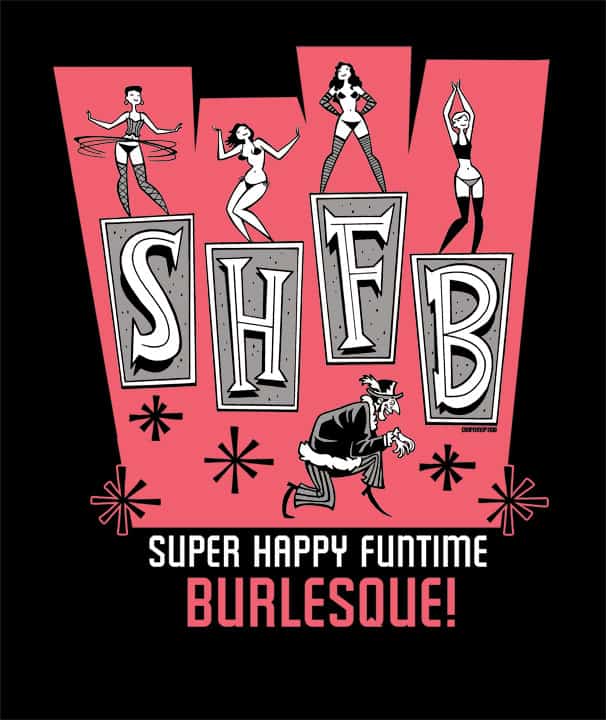 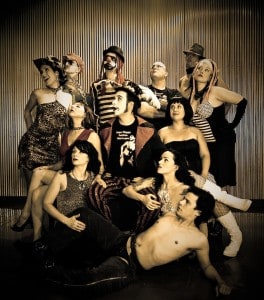 If I invited all of the people I know out to a Friday night of musical theatre, I would be one lonely theatergoer, rabidly hand-jiving while trying to bite back bitter tears before they could muck up my lip-synched rendition of “Beauty School Dropout”. But if  I asked those same people to join me for a night of live music, scatological humor, acrobatic strip-tease and an appearance by Prince (plus or minus the androgyny) well, let’s just say this is story about a burlesque and not an indictment of the company I keep. Curiosities and suggestive jokes abound at the Super Happy Funtime Burlesque, a show so bawdy, so salacious, I’ve just written both the words “bawdy” and “salacious” for the first time in my life–in the same sentence.

Super Happy Funtime Burlesque got its start in Grand Rapids in 2006, filling-out of local bars and hundred-seat venues with an anarchic revue bristling with  rude skits, sensuous ladies, and a killer soundtrack. Troupe leader and show emcee Corey “Mr. Happy Pants” Ruffin explained on the inception of the show, “There wasn’t a definitive moment when we said: Hey, let’s start a burlesque! The show came together around our various talents; after a while we learned about what burlesque was and we were like, ‘Oh that’s what we’re doing.” The show took off quickly from its humble beginnings, selling-out several performances a month, thanks largely to 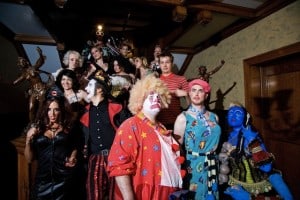 the revue’s ever-evolving routine and an extremely receptive audience. “It wasn’t too hard getting people to come to the show, what we were offering was so different from anything else that was around then.” In no time, SHFB became a staple in the Grand Rapids area night scene, performing regularly at The Wealthy Theater, The B.O.B., and The Intersection, visiting the show to various locales throughout Michigan along the way .

The troupe’s local success soon afforded them the true mark of accomplishment: a big red school bus. With that also came the fringe benefit of touring the burlesque nationally. It’s been nearly two years since SHFB took the road, and with massive success. The troupe has become one of the nations best toured burlesque companies, and the performances have only gotten more biting because of it. “When we’re performing 4 or 5 times a week, we get a sense of what works and what doesn’t, and that keeps the show from getting stale. It’s a lot like classic burlesque in that way, or the Marx Brothers when they toured.” 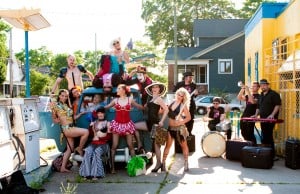 That sentiment alone reveals more about the raison d’etre behind SHFB than I could ever say about the performances. Seeing SHFB is like going to a legitimate theatre revue. There is entertainment, spectacle. Yes there are pretty, naked ladies, but there is also that put-on-a-show-mentality that seems as fun to do as it is watch.

Backing-up SHFB is the five-man, musical power-plant The End Times Orchestra–a band that is really an act unto itself–composed of some of the best musicians in the state. “The show is built around the original music. We lure the audience in with the promise of naked girls dancing, but they discover something more to the whole performance.”  SHFB will be returning to Michigan July 27th and 28th with a show at Bell’s Eccentric Cafe in Kalamazoo and a triumphant return to Grand Rapids’ own Wealthy Theater. Don’t miss the perfect excuse to get your friends together, grab a drink, and finally see what a group of twisted deviants you pal around with.

And if you can’ make it to these shows, get more Super Happy Funtime Burlesque show dates here.