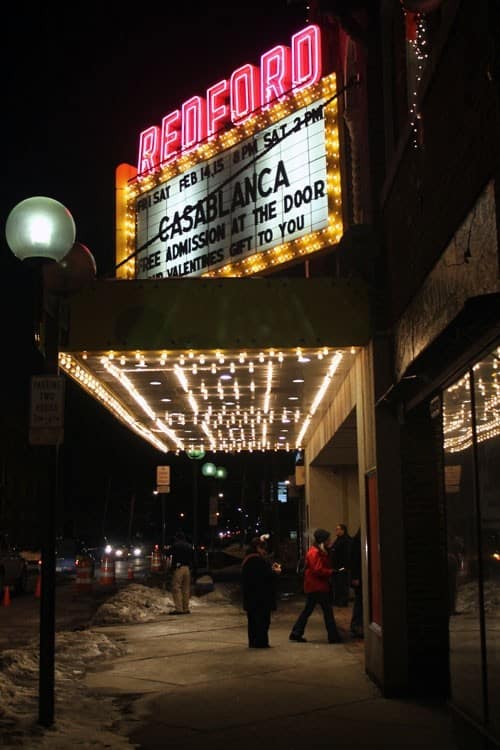 How the Redford Theatre Cured My Winter Blues

Table of Contents
Add a header to begin generating the table of contents
Scroll to Top
Share on facebook
Facebook
Share on pinterest
Pinterest
Share on email
Email
I hate to admit it, but surviving the great Michigan Winter of 2014 has not been an easy task for this Mid-Atlantic native. Sure, I’ve managed to navigate icy roads and rock a pair of snow boots like nobody’s business, but after weeks of trudging through frozen territory, an initial sense of accomplishment for surviving the cold has simply turned into exhaustion. I’m sure many—if not most—Michiganders can relate. Then again, I may just be a wimp.

I’ve found, however, that the best way to get over winter-induced grumpiness is to suck it up and get out of the house. “Find something fun to do, somewhere new to visit,” I told myself. I wanted to oblige, but my stubborn self really wasn’t in the mood to spend long hours outside in the snow. The challenge was on: could I find any fun indoor activities that stood out from the norm?

My professional Google skills led me to a wonderful discovery known as the Redford Theatre. Nestled on the outskirts of Detroit (I’m still debating the location, as it was a good 20-minute car ride from downtown), the Redford Theatre is a gorgeous establishment that’s been around since the 1920s. The marquee is grand, the décor is stunning, and the tickets are cheap. In fact, on my Valentine’s weekend visit, the theatre offered free admission for two showings of Casablanca. I had never seen the film and I love old-fashioned venues, so of course I was thrilled.

Inside the building, Japanese-inspired wall art and lighting adorned every surface, while a lobby filled with patrons featured a live book signing and locally-made Casablanca merchandise. I mean, how often do you go to a movie and leave with a souvenir? It was marvelous, and the grandeur made me feel as though I was spending an evening somewhere akin to the symphony or opera house.

Grabbing some popcorn and Vernors from the volunteer-run concession stand, I ran up the balcony staircase and let the sounds of lively organ music take me back to a time before my own. When I rounded the corner to take my first look inside the theatre, I became giddy. What was this magical place I had stumbled into on my way to Detroit?

A red-curtained stage surrounded by golden walls, intricate designs, and a planetarium-style ceiling that mimicked the night sky—it was magical. I took my place among rows of movie-goers and stood as an American flag appeared onstage and the National Anthem played. Shortly after, “night” fell on the crowd as the lights dimmed, announcements were made, and a short cartoon played. The main feature, although likely memorized by at least half of the crowd, gathered hearty laughs and appreciative clapping throughout the evening. At one point, my husband leaned over and asked, “Do you think this movie was as funny when it came out as it is now?” I didn’t have a great answer, but I did know that the room was filled with people who fully enjoyed the picture as if we were still in 1942, wearing red lipstick and running around with perfectly-coiffed hair. Overall, I had an amazing time and whole-heartedly recommend the Redford Theatre to anyone searching for a bit of nostalgia. I’m shocked to not have learned about this local gem a lot sooner, but I have to tell you—it was well worth the wait.

If you have any favorite spots for old-fashioned fun around the Mitten, let me know—I love exploring and I’m always searching for new ideas!