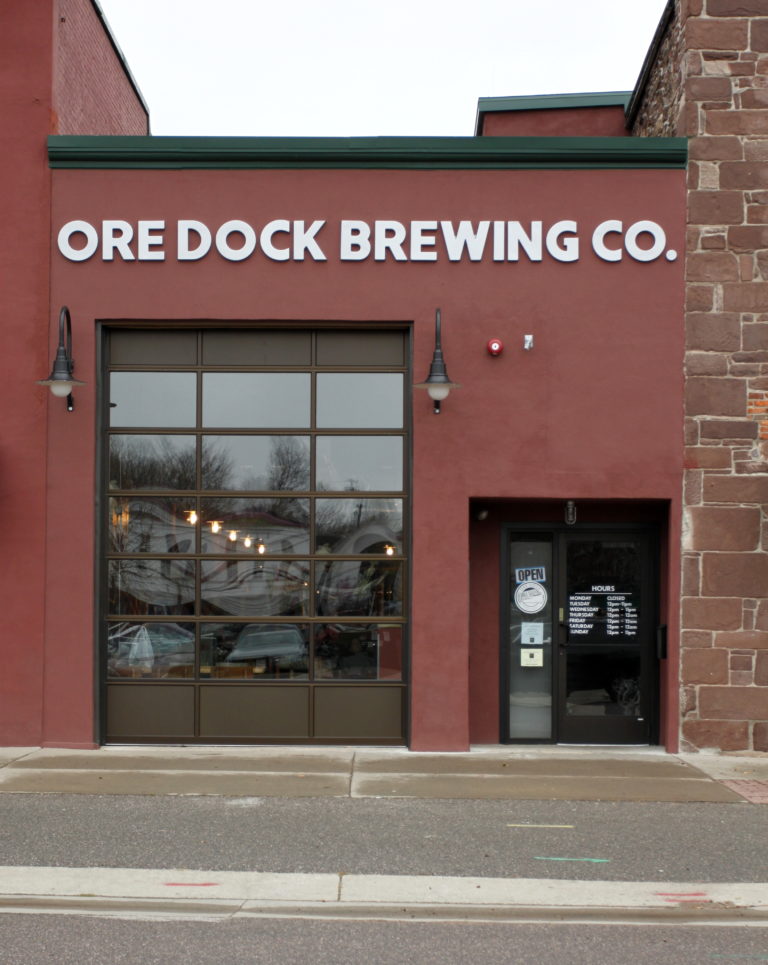 Ore Dock Brewery’s part-owner Andrea Pernsteiner is often seen holding her new son August (or Gus, as he’s known) on her arm as she walks around the brewery. As Andrea showed me parts of their renovation-success-story brewery that she started with her husband Wes, Gus sat in her arms, as in awe of the space as I was – but probably for different reasons.

The building was once a car transmission service center, and before that it was a garage and a showroom. It’s a crazy place for a brewery, but the result is a comfortable, home-like atmosphere that’s as atypical as it is inviting. The downstairs is split into two main areas, divided by large glass windows: the brewhouse and the sitting area. Up a set of stairs when you first enter is a massive room with a U-shaped bar in the center.

The details that someone can’t know from the first glance are what makes this place special. For example, there is a row of booths along the far wall of the second floor which Pernsteiner’s husband and father-in-law put together from old pieces of the car garage and the table tops are made from old re-purposed planks as well. The feet on the tables and booths are made of the first floor ceiling rafters. In a corner of the room is a swing, which is popular on weekend evenings, and is made of an old grain pallet. Pernsteiner incorporates these touches throughout the brewery, making for an economical and yet unique look that reflects the values of the U.P.: comfortable, resourceful and hearty.

As Pernsteiner says, it’s not just the values that are reflected in the business: “(The brewery) is inspired by the simple design elements familiar to the common Yooper. Wood, concrete and steel are meant to reflect the industrial history with which the Marquette community was built, while pieces of artwork highlight the eclectic nature of the community today,” Pernsteiner says. “The color palate is meant to mimic colors found in the vast nature that is found throughout the Upper Peninsula.”

The simplistic designs also translate the brewery’s mission: to create great beer. That’s it, says Pernsteiner, and Nick VanCourt, part-owner and brewmaster is the right man for the job.

VanCourt is more than a small-town brewer. He has experience at breweries throughout the region, all of which were bigger than Ore Dock. He says, however, that he always knew he wanted to be in the U.P., and he likes being a part of a group of owners who all have expertises that contribute to making the Ore Dock successful. VanCourt’s knowhow is extensive, and I struggled to keep up as he showed me how exactly he combines the water, hops, malt and yeast to make their beer.

His contributions to the Ore Dock are definitely not overlooked. “Nick and his wife, Marina, are a part of this business because we were so impressed with his brewing knowledge and experience,” Pernsteiner says. “We feel really strongly that the brewmaster is such an important part of the brewery itself that we were just elated that he and Marina also wanted to be (owners).”

Pernsteiner, VanCourt and the four other owners are often seen at the brewery, not working but enjoying the beer and talking with friends and patrons. This familial sense extends beyond just the owners: the vast majority of the work on the brewery was done by U.P. contractors. It was important to Pernsteiner to keep the work in their community, even if it wasn’t always the cheapest option. This decision certainly provided jobs and included the community in the making of the brewery, which helped to make it such a success.

While Pernsteiner showed me around the second floor, a man approached us and gave her a big hug and shook my hand. It was the man who had been hired to finish part of the wood floor that we were standing on. They chatted for a while, and when he left, Pernsteiner turned to me and said, “See what I mean? I think he enjoys coming here and thinks ‘I had a part in this.'”

And that’s just the beginning. The Ore Dock Brewery only opened in May 2012, and there’s a lot of room for growth. The brewery has an area that will be used for crafting beer when its time to expand, and the hope is that once they’re making enough beer to fill every tap in the brewery, they’ll begin to distribute their ware throughout the region.

Pernsteiner  says, “We want to distribute, bringing (the beer) to other places locally, regionally and being a product that Marquette and the U.P. can be proud of.” For those interested in visiting the brewery in person, the Ore Dock Brewery is open Tuesday through Sunday, and the second floor is open on Friday, Saturday and Sunday.