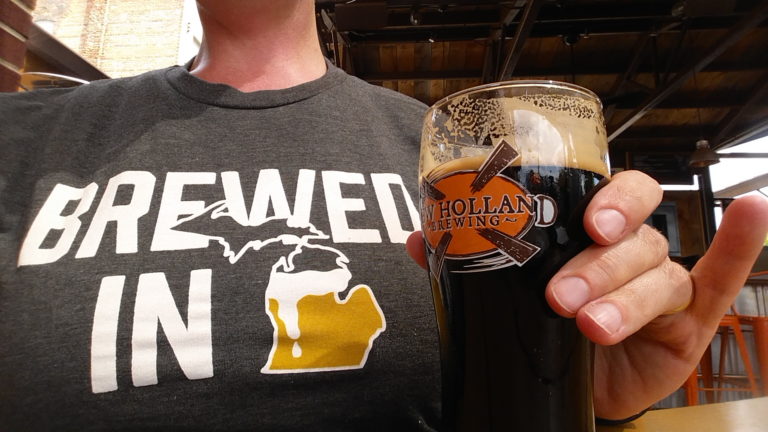 Part of what made my #MittenTrip to Grand Rapids so enjoyable was the brief roadtrip-within-a-roadtrip we took to one of my favorite places, New Holland Brewing’s Pub on 8th Street in Holland. In addition to enjoying beer, I have an affinity for certain spirits, so it was exciting to try some of what New Holland offers—especially the products that I’m unable to find on the east side of the Mitten. We’ll get to that shortly. First, true to form, I’m going to get a little nerdy on you…

I enjoy having context for the information I learn and the experiences I have. While at the pub, and on the drive back to Beer City, USA, I started to wonder about the craft spirits industry in Michigan. How important is it to the state? Why did it seem to suddenly explode a few years ago? Is this proliferation of craft spirits happening in other states, too?

Michigan’s craft distilling boom began after 2008, when the state passed a small-distillers law that made it much easier for new distillers to enter the scene. Under the law, a small-distiller’s license costs $100 per year, which allows license-holders to annually produce up to 60,000 gallons of alcohol.

Importantly, it also allows them to offer a tasting room where they’re able to serve free samples, along with cocktails, and bottles for retail sale. Essentially, the hurdles to craft distilling were removed and has allowed for an industry to grow.

As you might imagine, interest in craft production of food and beverages is on a dramatic upswing in Michigan (more here, in a recent Awesome Mitten article). What I didn’t realize is that, compared with other states, Michigan ranks third in the number of craft distilleries. Just two years ago, we ranked sixth. The potential economic impact of the craft distilling industry for Michigan is $400 million. This impact expands beyond the distillers to, for example, the state’s farmers who supply grains and other ingredients.

New Holland, which began producing spirits in 1997, is one of sixteen craft distillery members, along with three distillers-in-planning members, of the recently-formed Michigan Craft Distillers Association (MCDA). New Holland Artisan Spirits are produced in two locations: At the Pub, and at a facility on the north side of Holland. Tours are offered at both locations.

Since the small-distillers law was passed, New Holland has expanded their production dramatically. Six varieties of spirits are available year-round, and limited release spirits are available at intervals throughout the year. I’m particularly excited for the September release of Walleye Rye. If you’re interested in tasting the spirits, they’re for sale both the Pub, and at the retail store next door. At the store, bottles are available for purchase as well.

While on my visit to the Pub, I had the chance to try an Uncommon Old Fashioned off of the specials list—in addition to New Holland spirits, it was made with cold brew from Uncommon Coffee Roasters in Saugatuck. My favorite drink is an Old Fashioned, but I’m not a purist. I enjoy trying new twists on an old favorite, and this one’s a keeper.

In addition to this, I had a taste each of Walleye Rye (so newly released it wasn’t even on the menu yet), Pub on 8th Malt Whiskey (only available at the Pub), and Zeppelin Bend (distributed across the state). Now that I’ve tried it, and can now find it at my local beverage shop, I’ll be incorporating the Zeppelin Bend—an oak-y straight malt whiskey—into my home bar.

What about you? What do you love about Michigan’s craft distilling scene? What’s your favorite Michigan craft spirit?