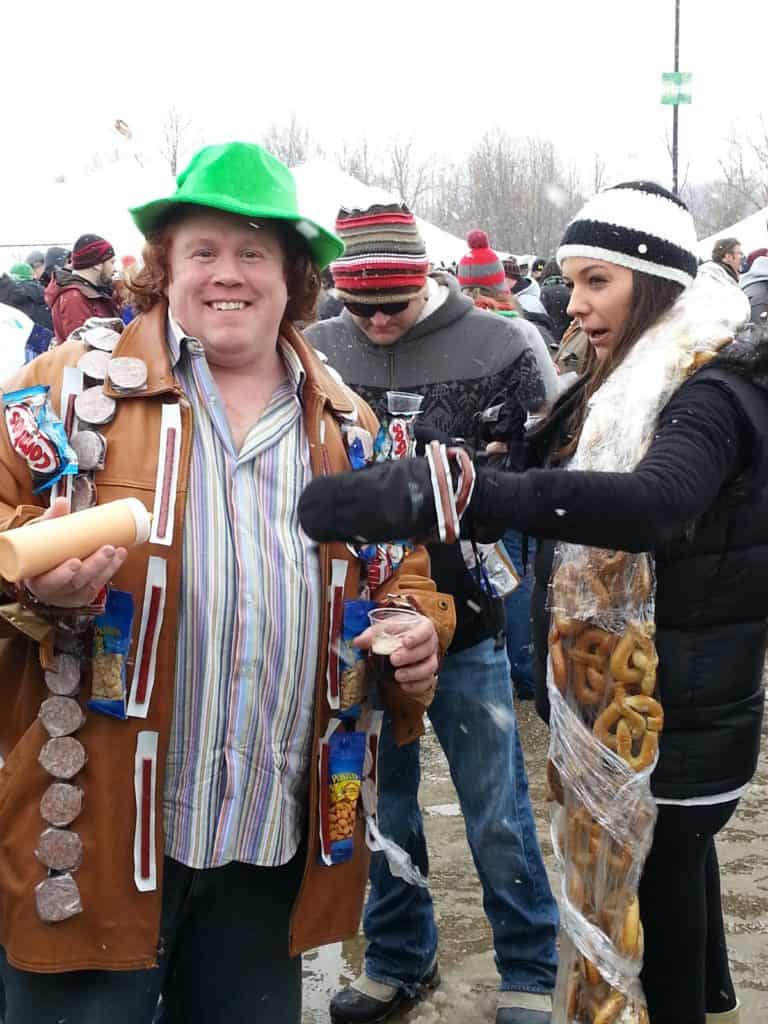 If You’re Going to Winter Beer Fest, Wear Your Food Around Your Neck

“Do you want a pretzel necklace?” was the text message I received from a friend at 9:31 am on Saturday morning, two hours and twenty-nine minutes before I was scheduled to attend the 2013 Michigan Winter Beer Fest put on by the Michigan Brewers Guild at Fifth Third Ballpark in Comstock Park, just north of Grand Rapids.

I had spent the previous night being regaled with stories of the crazy things I would see the next day from veterans of previous Winter Beer Fests—the costumes, the food, the sheer amount of beer.

“And we have to have pretzel necklaces!” one of my Beer Fest companions screamed the night before.  “When I was there last year, everyone had them, and they looked like such a good idea.  All they have there is snack food like turkey legs and sausage.”

So when I received the text message the next morning from a different friend asking if I wanted a pretzel necklace, I knew what I had to say.  “Uh, yeah!” I typed back.  “Why not?”

When I got to Fifth Third Ballpark, the line of cars stretched out the stadium entrance and down the US 131 exit ramp, almost reaching the main highway.  As I drove through the parking lot, people streamed out of cars and buses, cozying up in lines that stretched down the long sidewalk leading to the entrance.  A look around put to rest any thoughts I might have had of looking out of place with a string of pretzels and cookies around my neck; many people had similar jewelry, while some of the more adventurous attendees had strung together exotic chains of meats, jerky, cheese, doughnuts, or a combination of sorts.  These people came prepared, I thought.

It was no real shock to find a high level of preparedness at the Winter Beer Fest.  After all, tickets for the event had sold out in 13 hours—a new record.  For over a year now, Grand Rapids has been billing itself as Beer City, USA, and its denizens start salivating at the mere mention of a craft beer event.  Winter Beer Fest, in particular, has grown steadily in popularity over the past few years, and by now there is a regular contingent of festival-goers to whom the ins and outs of Beer Fest are old hat.  Any time you encounter a man with Combos and Slim Jims taped to the back of his jacket, you find it’s safe to assume he’s been here before.

Within moments of walking in, it was clear what all the fuss was about.  After walking past the ID checkpoint, I was handed a three ounce plastic cup which you are expected to hold on to for the entirety of the festival and use to sample the brews.  74 breweries brought more than 625 beers, which were laid out on 96 tables in five giant tents, and poured from 240 barrels holding 31 gallons of beer, so I knew my job was laid out for me.

Experts will tell you that you should have a master plan before ever taking your first drink.  Do you want to try only breweries you’ve never been to? Perhaps you intend to wait in line to sample specialty brews brought by heavyweights like New Holland, Founders, Brewery Vivant, etcetera.  Or maybe you just want to find a couple of your favorite beers and drink them steadily throughout the day, enjoying the festival atmosphere and the company of fellow craft beer lovers.

I, of course, had no plan.  My first instinct was to try a beer from every brewery, but I quickly reneged after gaining very little ground in a little over an hour.  I had managed to sample beers from Paw Paw, 51 North, Atwater Brewery, Blue Tractor, and Eaglemonk before I decided it would be best to wander around and get a lay of the land.  Within minutes, I hatched a plan that teetered between, “That looks interesting!” and “That line is short!”  In other words, there was still no plan.

A little after one o’clock, the festival was filled with the sounds of Grand Rapids folk rock band The Crane Wives.  Their set soundtracked the opening hours of the festival, and as their gorgeous melodies echoed into the tents, people rushed from line to line trying to taste as many drinks as possible.  The band’s catchy blend of folk, pop, and rock garnered more than a few surprised, “Who’s that?” questions from passerby.  As the show went on, a surprising number of people parked themselves in front of the stage with their little plastic cups and just enjoyed the show.

As the day wore on and my pretzel necklace got emptier and emptier, I made my way from one table to another, guided by my whim.  I took a bite out of a turkey leg that looked like it came out of the Flintstones, waited in line for New Holland to tap a special firkin of Dragon’s Milk, wandered behind some of the tables when one brewer mistakenly thought I was a member of The Crane Wives, and stood in one of the slowest moving Port-a-John lines I’ve ever seen.

Before I left, I dropped by the High Five Program/Sweaty Mouse Green Team table where they talked to me about the ways in which they were greatly reducing the festival’s garbage.  By encouraging proper disposal of waste, making sure most materials were compostable or recyclable, and clearly marking where compost and recycling receptacles were, the festival ended up with “16 yards of compost, 5 yards of recycling and only 4 yards of landfill, successfully diverting 84% of waste from landfills,” according to The Green Mouse.

By the end of the festival, I managed to taste beers from about 16 different breweries, and since I sampled most of my friends’ beers, I got to try two to five different beers from each brewery.  A couple of friends had gone home prematurely, casualties of an early morning industry event and poor drink-pacing.  I found, however, that stretched out over a six hour period, I was able to enjoy drinking without ever getting hammered.  I discovered a few new beers I liked—from Jolly Pumpkin, Schmohz, and Arbor Brewing Company—and some that I didn’t—namely everything I tried from Greenbush—while getting to enjoy great music and a fun atmosphere.  If there’s any advice I have for people looking to go next year, it’s bring food on a string and wear sensible boots.