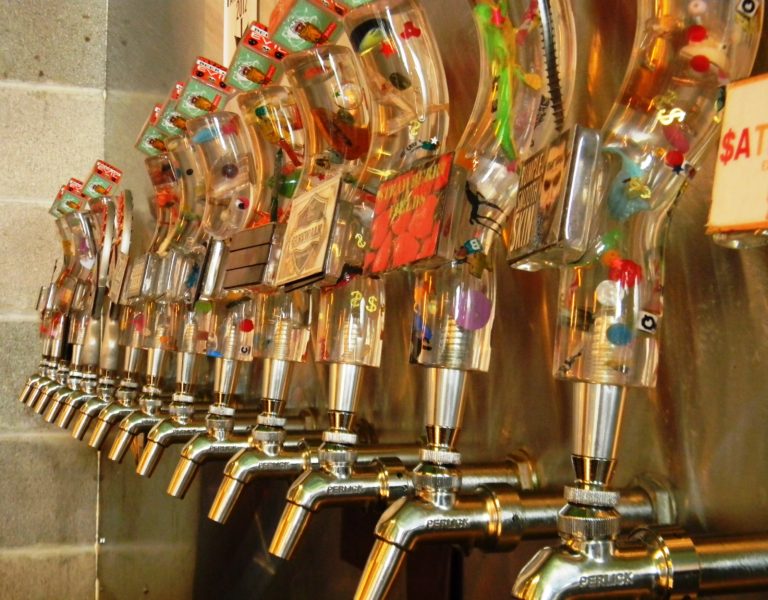 This month for the Michigan Beer Tour I traveled north to the hinterlands of Traverse City, Michigan. It’s actually not a very long journey: much to my chagrin, I found out that Traverse City is a scant 2 ½ hours drive from Grand Rapids and therefore close enough that I should have visited on a much earlier occasion. I’ve highlighted four breweries (though it should be noted that there are other breweries in the peninsulas and the drive through Michigan’s bounty should be motivation enough). 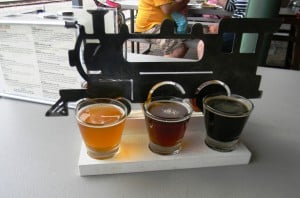 The Filling Station is a relatively new establishment, owned and operated by the Klepper family. Housed in a repurposed train station directly off of the TART Trails, the Filling Station is still visited by the occasional train. The bar inside always has at least 12 handcrafted beers on tap. In addition to seating inside, there is ample patio space next to the trains that make for a pleasant way to spend a hot Michigan summer’s afternoon. Just in case you work up an appetite making the trek to Traverse City and subsequently consuming quality brews, they also produce house made flat bread pizza.

Beer to try: Wellington Wheat. This golden ale is perfect for patio sipping. It has a sweet, grassy taste paired with a round body. If you can keep your hands off it for 10 minutes, the flavor opens up like a bell after sitting. 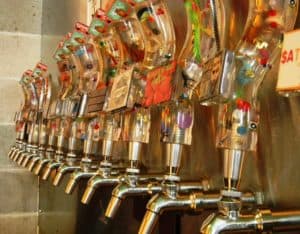 Right Brain is a community labor of love that began while the owner was still a full time barber. His brews quickly became so popular that he was obliged to purchase a new space to accommodate both a larger brewing capacity and a public that wanted to get the good stuff from the source. The new location (on 225 E 16th St) was literally put together by brewery employees and opened Labor Day Weekend 2012. Right Brain is known for its quirky creations. There is the Pie Hole (made with whole pies from Grand Traverse Pie Company), the Spear Beer (featuring enough Michigan-grown asparagus to make your urine smell), and the Mangalista Pig Porter (which uses real pigs’ heads). So why the name? The owner was the only right-brained student in his senior year writing course.

Beer to try: Hundred Horses. I would consider this sessionable, but I do like to sip on some more complex flavors. Chestnuts complement a strong malt structure in this medium body brew. Just slightly sweet, I would go back for a second pint. 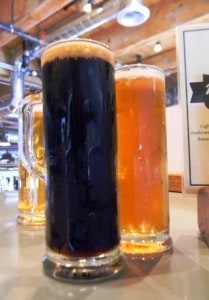 North Peak is one of the old standards in Traverse City. Built in 1997, it is the second oldest brewpub in Traverse City. A newly remodeled interior features hardwood floors, tan brickwork, and exposed ductwork. Together it gives off a very comfortable, firm feeling. It leaves the impression of being built to withstand harsh Michigan winters. David, the headbrewer, kicks out an impressive 1,250 barrels of beer a year, all poured from the taps of the pub. He draws inspiration from other good beers discovered along the way. These delicious drinks are accompanied by a full menu that features appetizers, pizzas, sandwiches, and entrees.

Beer to try: Blueberry Rye. Here’s your fruity summer beer for that backyard BBQ. This rye beer features a citrus, floral hop presence with rye as a backdrop. The light blueberry flavor comes from real blueberries that are added during the conditioning process. 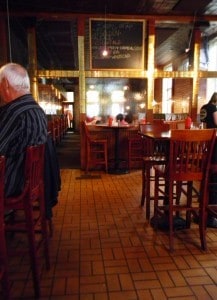 Mackinaw Brewing Company is the only brewery in the Traverse City area to predate North Peak. It’s located right in the center of downtown TC. Though it has a narrow street front, the restaurant has quite a long layout and looks like it can accommodate quite a crowd. It has a casual atmosphere, frequented by regulars who know the bartenders by name. They’re open 7 days a week and pair handcrafted beers with a full menu.

Beer to try: Belgian Whitecap. This white features a sweet, wheaty flavor with an orange zest. It’s saved from being too sweet by a crisp hop finish.