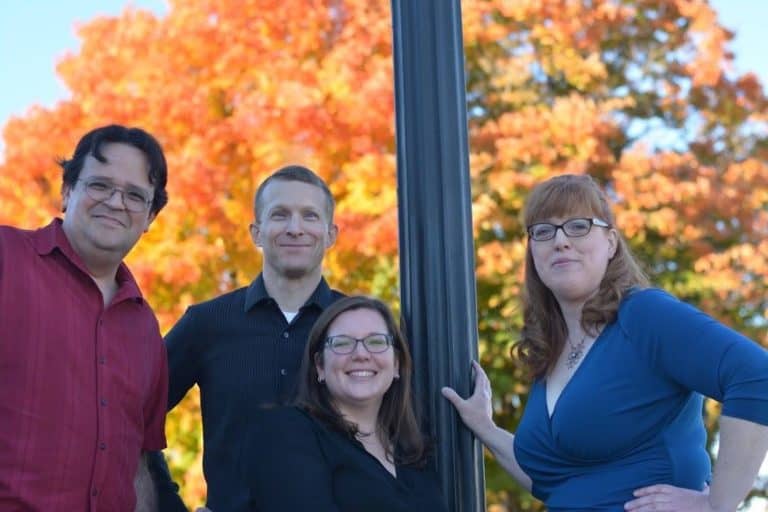 There are a ton of different things to love about music. Music can, of course, sound pleasing to the ear, but it can also be something to dance to, stir emotions deep inside of us, or just be plain ol’ fun. On top of all of that, an often overlooked aspect of music is just how fluid and malleable it can be. We love mashup videos, popular songs converted into every genre imaginable, and general funky things musicians can do with just a few notes. A Marshall-based group, Misdirection, combines all of these things with masterful musical skill to create a sound that’s equal parts unique and fun.

Misdirection originally was comprised just a trio, Kathleen Warriner (clarinet, saxophone, oboe, flute), John Rucker (drums, percussion), and Ramberto Bastell, Jr. (guitar, bass, synth). The idea for the band first formed while the three were performing in the pit for a show at Tibbits Opera House in Coldwater, MI. “They were playing around with their synth sounds, and all of a sudden they were playing clarinet stuff,” Warriner remembers fondly. “I said ‘fine, I’ll just get me a synth thing and play the drums.’ They were like ‘well do it and we’ll make a band.’” From this lighthearted exchange came the concrete idea of Misdirection. After just a few performances, the group brought in Marguerite Grantier Grupke (violin, bass) as a guest at first during shows, and then inviting her into the group as a full time member. While it was never officially decided, Warriner confesses that she is a natural organizer and so has taken ownership of that role for the band.

There’s no shortage in musical background for the members of Misdirection. Warriner and Grupke were both music majors in college and have taught music, while Rucker and Bastell both have past experiences in bands, with Bastille even has appeared on national television in his home of Puerto Rico. With all that musical talent, the group aims to craft and bend songs in ways that most of us wouldn’t even begin to think of. “We’d say ‘hey, pull up this song’ and we’d listen to it and try to figure out what we could do with it,” Warriner explains. One of her favorite examples that she shared with me is a recording of the group performing Billy Joel’s classic “Piano Man” without a piano.

Misdirection plays frequently around the West Michigan area, with multiple appearances at the restaurant Zarzuela in Marshall and JT’s Billiard Bar in Coldwater. With four busy schedules to balance, it’s amazing how quickly the band can put together a show, which speaks to their musical talent and abilities. “We pretty much work on one or two rehearsals before a gig,” Warriner tells me. With some shows running several hours, this is even more impressive.

Coming up, Misdirection will be performing a romantic Valentine’s Day-themed show at Zarzuela on February 11 from 8pm to 11pm. Warriner also hints to me that time in the recording studio might be on the horizon, with the band showing interest in exploring mixing more originals into their expansive repertoire. Whether you’re in the area, or ever see the day when a CD finds its way into existence, Misdirection is a jazzy, sonically-unique band that you should give a listen.

You can keep up with Misdirection by liking their page on Facebook!