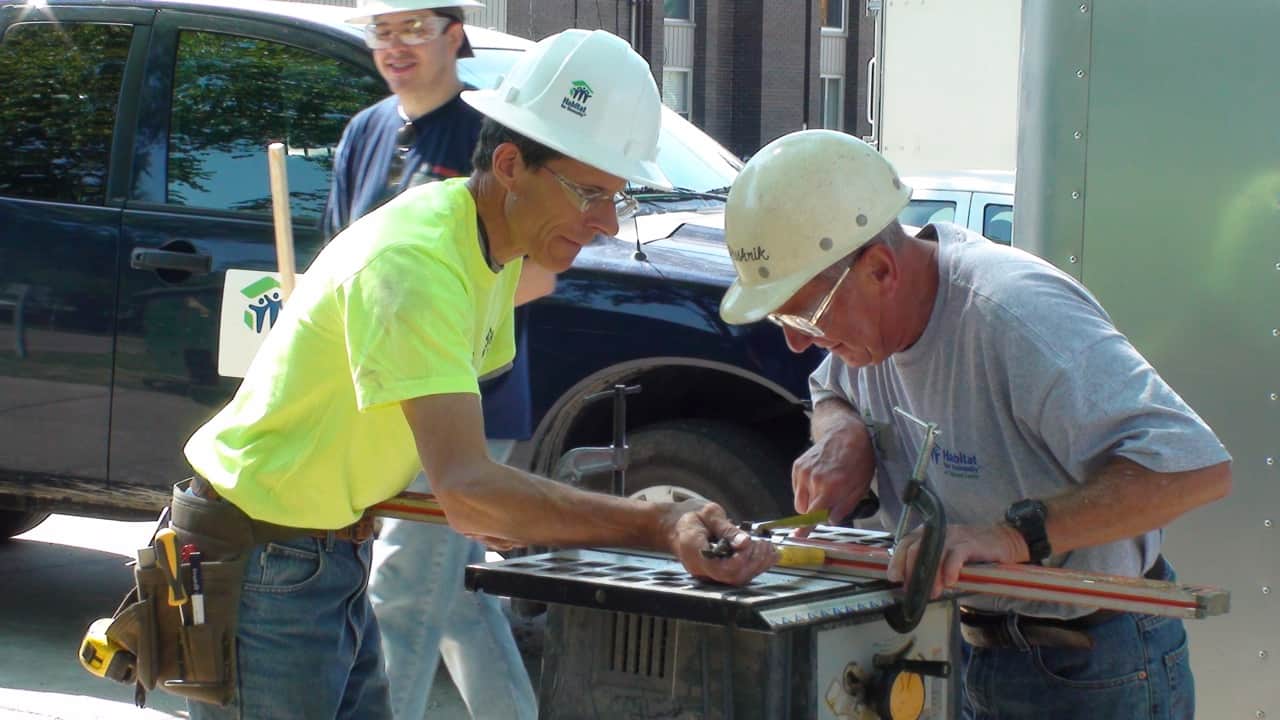 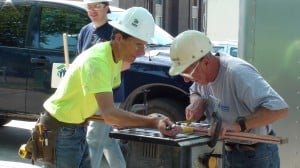 It’s baseball season in Michigan (and across North America) and nowhere do we see more Tiger pride than in metro Detroit. This year Habitat for Humanity of Oakland County is using the Tigers as a guiding light toward raising funds for its affordable housing efforts, with incentives for matching funds from Consumers Energy.

People often think Habitat for Humanity, an international organization that seeks to provide affordable and safe housing for everyone, gives houses away to people who cannot afford to buy a house. That could not be further from the truth.

Habitat gives a hand  UP, not a hand out, to empower families to improve their living circumstances, and thus, their lives. Aspiring homeowners apply to Habitat in their community and, if their case is a good one for home ownership, they go through a series of finance classes and wait until a house they want, in a neighborhood where they’d like to live, becomes available.

Next, Habitat homeowners BUY their house from Habitat, while also putting in what is called “sweat equity,” which means working alongside the skilled volunteer builders who remodel or build home for Habitat. At the end of the process, they receive keys to their new home – often the first they’ve ever owned, and perhaps even in their family, too – and the results are transcendent.

It is amazing to see how having a safe, affordable home to call your own makes a difference in people’s lives. In Oakland County, the very first Habitat homeowner, Doreen Marquis, tells audiences regularly how her entire life changed, and how her children (now grown) were placed on a path to success, simply because Habitat helped her get a house. 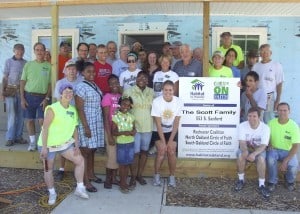 In case you don’t know much bout Habitat for Humanity, it’s a grassroots organization dedicated to the elimination of poverty and sub standard housing. HFHOC is a local affiliate of Habitat for Humanity International, which was founded in 1976. The organization’s mission is to end poverty housing and homelessness worldwide. Since its inception, Habitat is the 6th largest home-builder in the United States; the organization has erected more than 600,000 homes and helped more than 2 million people around the globe.

Habitat for Humanity of Oakland County was founded in 1994 by a small group of volunteers who believed in the vision of a world where everyone has a decent, safe and affordable place to live. In partnership with businesses, faith-based organizations and volunteers, HFHOC has served more than 160 families in Oakland County over the last two decades.

Of course, it’s not easy to build a home – neither to find the place to do it or the funding to make it happen. You’d think that with so many vacant properties, it would be a piece of cake, but after the housing industry crash of 2007-2008, banks became even more reluctant to grant loans to deserving homeowners. That increased the need for everyday folks to find other routes to home ownership.

Habitat is one of those routes. In Oakland County, there is a silent housing crisis happening as we speak. Last year, Habitat-Oakland fielded nearly 700 applications from would-be homeowners – and could only service 20 families. This year, the numbers are slightly lower, mostly due to available funds. Clearly, many people have a need; as a community, how many can we help? 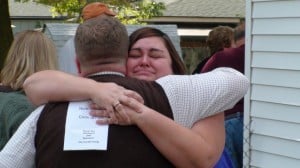 More than 1,750 homeless students are enrolled in Oakland County Schools; there are nearly 6,600 properties in Oakland County in foreclosure. In one of the most affluent counties in the country we continue to see a housing crisis. Our challenge is that we are hardly making a dent in the affordable housing problem.

Back to baseball…Last year, thanks to Consumers Energy and 1,000 donors, Habitat for Humanity of Oakland County (HFHOC) raised more than $34,000 through the Home Runs for Habitat campaign. This year, Consumers is once again inspiring the statewide effort, with every affiliate seeking to raise much-needed funds to support their efforts.

Using the CrowdRise platform, Habitat for Humanity of Oakland County is fiercely participating in the Homeruns for Habitat Powered by Consumer Energy initiative, to raise money and build energy efficient homes in Michigan. If the numbers are right, Consumers could double or triple the value of this year’s online donations.

The first “pitch” was thrown last month; we have until mid-July to see what we are made of , though the Consumers initiative will continue until the Play-Offs. Here’s where it’s all happening: http://www.crowdrise.com/BuildOaklandCounty/fundraiser/buildoc

Last month, the Mefford family finally received the keys to their new home, a heart-warming celebration by all accounts, since the entire community of Clarkston spent two years trying to find a suitable home for the young family. They were also the first Habitat-Oakland partner family to receive a vibrant painting by Tim Yanke from the latest in a long line of the affiliate’s corporate partners, Park West Gallery in Southfield.

“So many people, companies and ideas come together to help one family find suitable housing where they can thrive,” says Tim Ruggles, Executive Director/CEO of Habitat for Humanity of Oakland County. “Every day, I am overwhelmed with gratitude for all of the dedication that goes into this mission to resolve the housing crisis in our community, and around the world.”

All winter, DJ and Kaleena Mefford worked alongside Habitat volunteers and staff to renovate their Waterford home. They were beyond thrilled to leave behind a trailer with severe plumbing issues, poor-quality windows and hardly any insulation. In the 11th hour, they received another heartwarming donation: a swing set from the Cabadas family of Clarkston, members of Calvary Evangelical Lutheran Church, one of the many partners in the My Habitat Clarkston community movement.

“It takes a village to build a village,” says Ruggles. “The Meffords are another one of our proud, hard-working, devoted partner-families who looked for a hand UP – not a hand-out – to improve their housing situation. What more meaningful work could there be than this?”

Check out Habitat for Humanity of Oakland County at www.habitatoakland.org.

Lynne Meredith Golodner is owner of Your People LLC (www.yourppl.com), a Southfield public relations company, and she is the author of The Flavors of Faith: Holy Breads (Read the Spirit Books). She blogs at www.lynnegolodner.com. 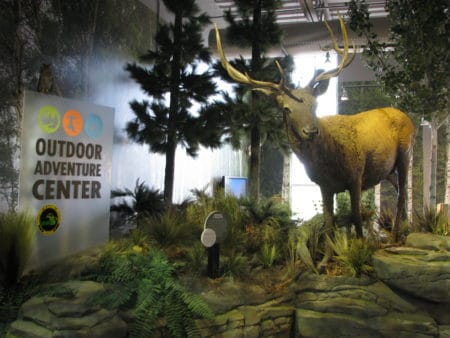 Among us Michiganders outside the Detroit metro, the Motor City doesn’t exactly have a reputation as being an outdoorsy destination, even though its economic… 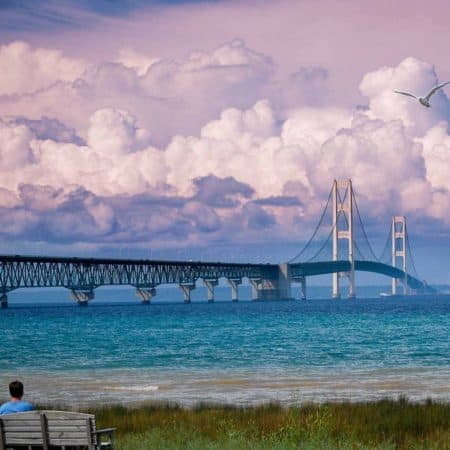 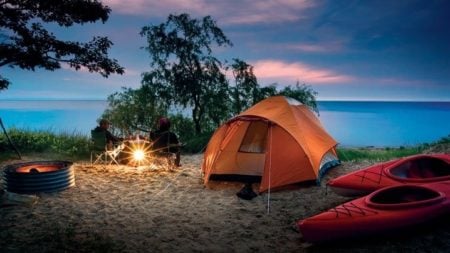 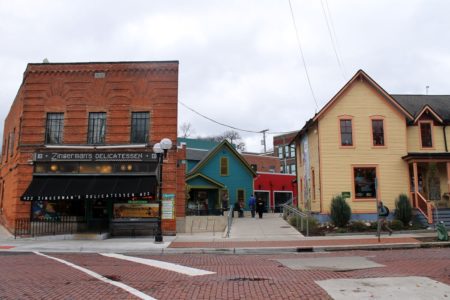 The first time I found myself in Ann Arbor, my husband and I were visiting a friend at the University of Michigan. Wanting to… 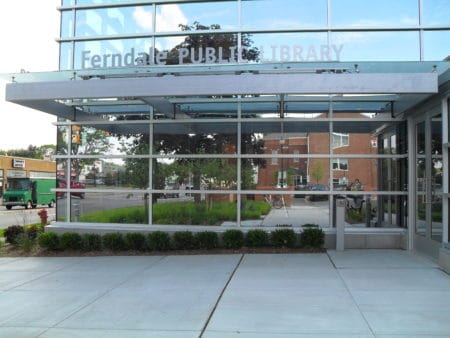 This year, the previously named Ferndale Public Library transitioned into the Ferndale Area District Library. While the change might not be immediately felt by… 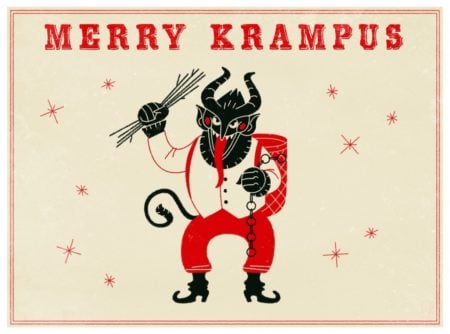