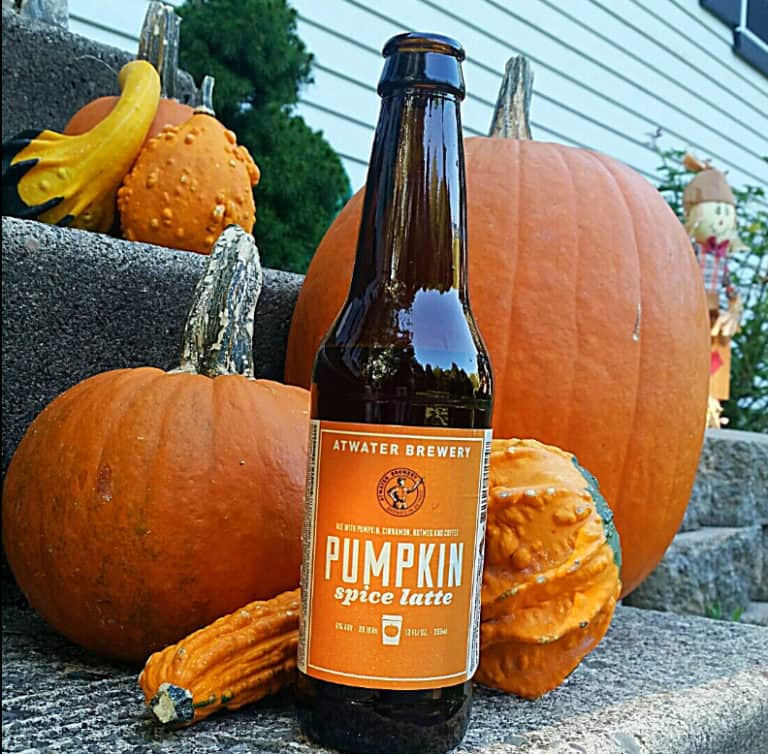 Fall in Michigan means crisp mornings, spiced cider, warm donuts, and of course — speciality Michigan beer. Michigan brewers are known around the country for crafting delicious and complex beer for every season, but this year’s pick of fall-focused brews are especially spectacular. From Pumpkin Spice Latte to Oktoberfest and S’mores flavored concoctions, read through our favorite autumn beers and sample them under the leaves stop falling!

You can’t talk Michigan breweries without first bringing up Founders, and you can’t talk fall beer without mentioning their Harvest Ale. This beer has an ultra juicy hop presence, exploding with fresh pine, melon and citrus notes. Finish it with a toasted malt undertone and you’ve got this season’s harvest in a glass.

With custom designed and locally sources pumpkin spice and coffee extracts, Atwater’s PSL is the perfect beer equivalent of this coffee-shop hit. This is a Munich Dark malt, which brings a walnut flavor that pairs with the Honey malt and Melanoidin malt, combining honey and bright sweetness. All that is to say — it’s a pumpkin spice latte, but in beer form!

Ready for Halloween monsters? Arbor Brewing is taking on the legend of the werewolf with a strong, dark, spiced beer using ingredients from Germany and the Netherlands. Brewed with warming spices and a hint of brown sugar, the Violin Monster is as black as the night that conceals the monsters. This brew changes every year so make sure to try it again. It’s a little less spicy than years prior.

New Holland has made a name for itself through Dragon’s Milk. The iconic Bourbon barrel stout is famous across the country, and this fall, we’re enjoying a it’s s’mores reserve. Made for crisp evening campfires, the stout has hints of graham crackers and marshmallow behind the chocolatey notes of all Dragon’s Milk. Pop one open this autumn (just one, as it’s 11% ABV) and see how it compares to other Dragon’s Milk reserves.

We could have picked dozens of this fall classic for our list, but we went with Lansing Brewing Co’s popular rendition. LBC used three different Germany style malts; Pilsen, Vienna and Munich, giving the beer a bread-like malt flavor and easy drinkability. This version of Oktoberfest keeps to the original, expect for its use of hops for the Washington state region (instead of Germany!).

An “autumn fire,” Jolly Pumpkin has crafted a beer that captures the light and radiance of fall sun and leaves. It’s a sour saison with gentle amber malt blends with smooth caramel notes and a hint of chestnuts. Sip this beer at one of Jolly Pumpkin’s eastern Michigan locations!

We had to add this one to list — autumn is in the name! A London style Extra Special Bitter (ESB), Short’s ale bursts with flavors including malty sweetness and earthy, herbal hop bitterness. Winner of a silver medal at the 2006 Great American Beer Festival, Autumn Ale is a crisp refresher for the end of a day filled with pumpkin picking and corn mazes.

As the nights get darker, so do our beers. With 19th century brews and recipes as inspiration, Arcadia’s London Porter draws on rich historic tradition. The flavor starts with a bold, pleasing sweetened coffee richness, and gives way to subtle smoke. A hit of sweetness, faint pear and hay notes remind drinkers that there are some delightful American Glacier hops under all the finery.

A true fall icon, Griffin Claw’s Screamin’ Pumpkin is like a slice of warm pie.Even if you’re not a big pumpkin person, this one goes down smooth and tastes great on most pallets. In the amber ale, you can taste cinnamon, clove, sweet pumpkin, a little molasses, making it the perfect Halloween celebration drink.

There are countless beers perfect for the fall season, and we know we missed some. What are your favorites? What would you add to our list?