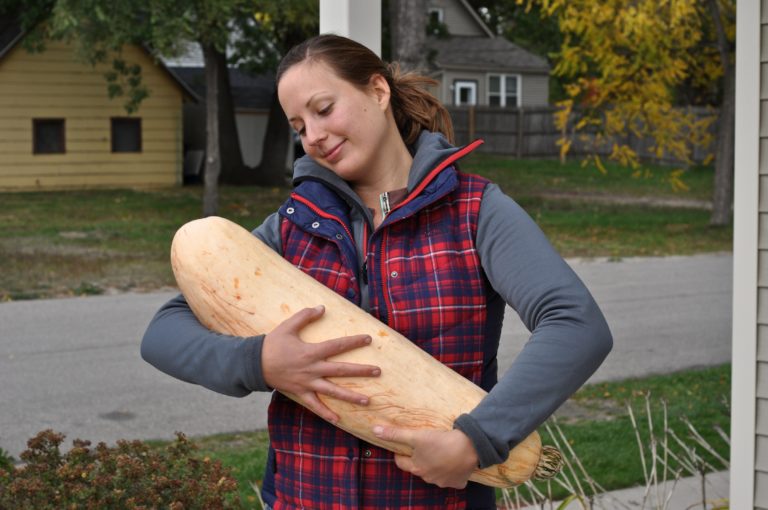 I was at the Traverse City Sara Hardy Farmers Market when I saw a trailer hitched to a pickup truck with a mountain of reds, oranges, yellows, greens and browns cascading down – a familiar sight at a Northwest Michigan farmers market in early October. However, lying across this tumbling pile of vegetables was a mammoth, pink object about eight inches in diameter and at least three feet long. I approached the farm stand with my eyes fixed on the strange specimen.

“Excuse me, sir.” I got the farmer’s attention as he was packing up their wares. His name is Tim Murray – one of the nicest vendors at the TC Market.
“Yep. How can I help you?”
“Is that a squash back there?” I asked, pointing to the big, strange pink thing.
“Sure is. It’s called a banana squash.”
I gave him my best skeptical eyebrow and repled, “Really? Hm. Can you eat it?”
“Yeah, of course you can eat it. It’s sweet and tender.”
“How much for it?” I asked out of curiosity, rather than serious intent to purchase the whole damn thing.
“Three bucks.” WOW. Good deal. My brain exploded with the possibilities of what I could do with that much squash.
I smiled when he lugged over the banana squash and dropped it into my arms.
“Oye,” I thought. This had to be at least 20 pounds. As I giddily marched to my car to take my autumn bounty home, I felt ridiculously proud of my armful of pink cucurbit. Folks stared and children’s eyes widened as I passed. Then they would whisper, “What is that she’s carrying?”

From my brief research on the interwebs, I’ve learned that the banana squash is a member of the winter squash family, and a member of one of the most diverse domesticated and cultivated species of squash in the world. And, truth be told, it is supposed to be as big as a toddler (as one friend described it). A few fun facts about this variety’s past lives: the banana squash originated in South America and was brought to the United States in the late 1800s. However, by the early 1900s, it lost popularity in favor of the more conventional varieties like butternut and acorn squash. This uncommon squash owes its existence to heirloom and seed savers who have cultivated and maintained its gene pool over the last century. I am storing a piece of natural history in my fridge and turning it into soup as I write.

Preheat oven to 375 Fahrenheit. Clean and chop winter squash into 1-inch cubes. Toss cubes lightly in olive oil or butter and bake in oven until squash is tender, about 20-25 minutes.
While your squash roasts, heat butter or olive oil in a large saucepan over medium flame. Add sliced onions and cook until caramelized, stirring often. Add the minced garlic to the onions and gently brown the garlic. Add 4 cups of stock and stir in bay leaves and spices.
Add roasted squash to the pot and simmer 20-30 minutes.
Remove bay leaf and blend the soup until completely smooth and creamy.

Soup can be served in a deep bowl with coconut milk and cilantro, also with a little extra chili pepper flakes for additional kick. Soup can be frozen and stored for up to 6 months.
Perfect for a cold autumn or winter night.

The banana squash has a thick-walled rind and appears salmon pink when ripe. The pumpkin orange color of the flesh is thick, firm, dense and meaty. When I baked the squash, the flesh became fragrant, rich and earthy sweet. i noticed it had a lighter, more subtle flavor than other squash varieties.

I have only just begun my adventures in cooking this lovely new discovery, and I do have great plans for soups, pies and breads. I strongly encourage all of you to seek out the foreign and bizarre at your local farmers market. You will never know when you will find a diamond in the rough or, in my case, a pink banana squash in a mountain of acorn, butternut, turban, spaghetti and Hubbard.