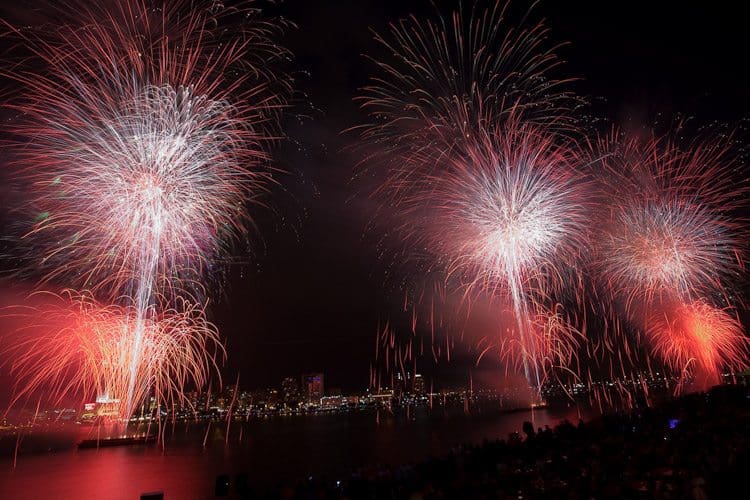 Fire up for some awesome fireworks this summer! Check out what your region has to offer for decorations in the sky and don’t forget a blanket and a sweatshirt!

When: June 27, 2016
Where: Along the Detroit River. Although, the best place to watch the fireworks is the Official VIP Rooftop Party located atop the Miller Parking garage just west of the Renaissance Center.

When: July 4, 2016
Where: The large viewing area is located right next to Lake Huron and the fireworks are set off from a ferry barge at dusk on July 4th.
Other deets: The straits area of Michigan is one of the best spots to watch fireworks and the secret is to watch all the fireworks from Lake Huron itself! Mackinaw City is the most popular area for fireworks on the Fourth of July because they invest a lot of money in making sure the crowd is pleased, especially for the grand finale. The city brags that it has the largest firework display in Northern Michigan.  This makes for a beautiful scene because when the fireworks go off, their lights are reflected in the lake as well. Mackinaw City is also a great place to watch the fireworks because not only do you see their fireworks, but you can watch the displays of four other places too, including Cheboygan, Bois Blanc Island, Mackinac Island, and St. Ignace.
More Information Here!
— Mel Libby

When: July 5, 2016 at 10:30pm
Where: Ah Nab Awen Park in downtown Grand Rapids
Other deets: New this year is a parade starting at 5 p.m. on the corner of Lyon and Ottawa NW, followed by live music and children’s events held in Ah Nab Awen Park.  Fireworks will begin at approximately 10:30 p.m.  All events are free and open to the public.
More Information Here
— Chad Cramblet

When: June 30, 2016 at 9pm
Where: Red Run Golf Course
2036 Rochester Road
Royal Oak, MI
Other deets: Best place to watch? – The golf course is private to attend, but very visible from surrounding neighborhoods and parks
For more information!

When: July 4, 2016 at 10:15 p.m.
Where: Community Park, North Grand Ave.
Other deets: It is supposed to be the largest fireworks display in Livingston County’s history this year.
More Information Here!
—Brittany Green

When: July 4, 2016
Where: Holland’s Kollen Park (located near downtown Holland on Lake Macatawa)
Other deets: For the 9th year running, the local radio station JQ99 will present fireworks that are going to be displayed over the lake. The celebration will begin around noon with kid’s games, a moon bounce and food vendors. Later on in the evening there will be a free ice cream social sponsored by the Community Foundation, a martial arts demonstration, a wild animal display put on by the Outdoor Discovery Center, and live music on the main stage.
More Information Here!
—Mike Guisinger

The city of Ann Arbor itself does not host any fireworks on the 4th of July, but Whitmore Lake and Dexter put on some of the best fireworks displays in Southern Michigan.

When: July 4, 2016
Where: Whitmore Lake
Other deets: The Whitmore Lake Water Ski Club often performs a show at around 7pm, and once the sun sets, many spectators on land and in their boats watch as the barge begins the fireworks. The show typically lasts near 25 minutes, with a fantastic grand finale. This display is free to the public; there is parking and a public viewing area on Main Street near exit 53 off of US-23.

When: June 29, 2016 at 10pm or sundown
Where: Hudson Mills Metro park in the small town of Dexter also has a hugely popular fireworks Other deets: The only cost associated is admission to the park. Its $15 for the admission. It is best to arrive early, because with all the traffic, many end up seeing the show from their cars.
—Jack Durham

When: July 3, 2016 at “Dusk”
Where: Over Lake Michigan, near Leland Harbor.
More Information Here!

When: July 4, 2016 at “Dusk”
Where: Village Parks & Marina
Other deets: From 7:00-8:00 PM: Northport Village Voices and Northport Village Band will perform. After 8:00PM K Jones and the Benzie Playboys (Zydeco, Cajun, and Creole Music) will play until the beginning of the fireworks show and will continue after as well. (The fireworks will go on in rain or fog, unless it is a lightning show.)

For other firework displays happening in Michigan, check out michiganfireworks.com

Have a favorite spot in your town to watch fireworks? Share in the comments section below!