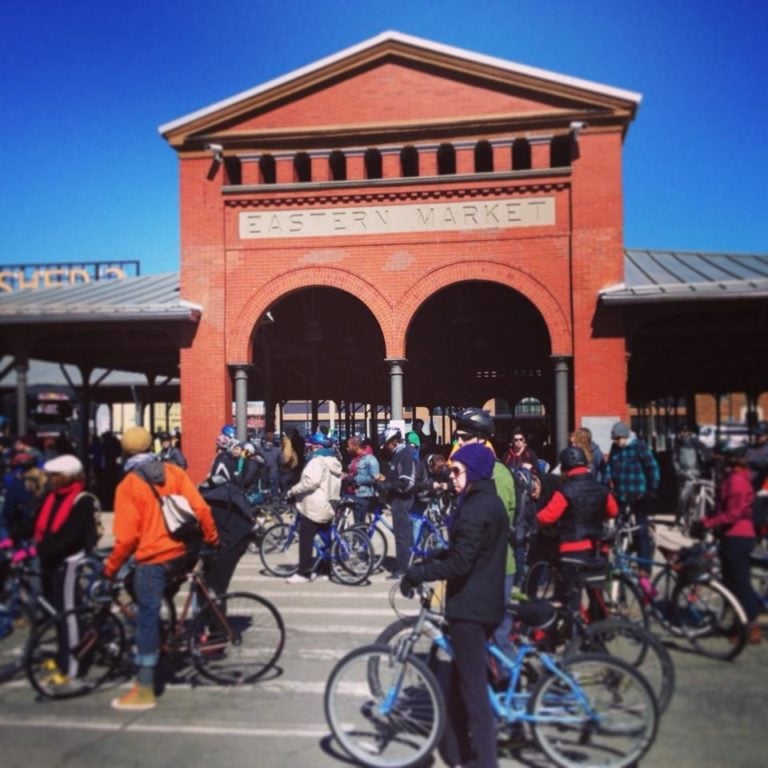 Under a clear blue sky (and finally seasonal temperatures) on the final Sunday morning of March, a crowd slowly gathered for cycling in Eastern Market in Detroit. Some pedaled in on bikes from down the street, others drove from the suburbs, and a few ambitious cyclists rode in from well beyond the city limits. Ultimately, the number of two-wheelers swelled and overtook their four-wheeler counterparts en masse in a gathering for the season opener of Slow Roll. A weekly event, Slow Roll features a new and unplanned route to allow riders to pass through a variety of neighborhoods in the city and catch a glimpse of landmarks, countless blocks evidencing days gone by, new businesses and developments, and the diverse faces of everyday residents. These artifacts of Detroit cannot be seen from speeding by on a bustling expressway, and the slow pace (8-12 MPH) of the ride offers cyclists an opportunity to discover the thousands of miles of urban streets and appreciate the city in its present form.

On the flip side, the crowd is a form of entertainment in itself, which at one point last summer grew to a horde of 1,700 riders, appears as an endless stream to the horizon. The cyclists conquer the city streets seemingly out of nowhere, halting motor traffic (more affectionately known as corking) at the intersections, honking horns and bells, blasting hip hop, rap and rock on stereos, rolling up their pants to expose brightly colorful socks, and mounting patterned helmets with cool designs. Not to mention the parade of mountain bikes, road bikes, racing bikes, Schwinn cruisers and the occasional pedicab, rickshaw, tandem or unicycle. And of course, the rollerblades and skateboards that take on the distance with the rest of their two-wheel companions. The season opener featured an 8 mile route down St. Aubin to Hamtramck and back via. Mt. Elliot and home stretch down Gratiot back into Eastern Market. We rolled past St. Stanislaus church, the GM Detroit-Hamtramck Assembly Center, a Faygo pop warehouse, an old firehouse, and the Goeschel Building, with plenty of time to take in the sights and sounds at a relaxed pace.

Typically a 12-15 mile ride, which takes places on Monday evenings (with a new third Thursday ride being offered in 2014), Slow Roll is organized by Detroit Bike City founders Jason Hall and Mike MacCool. Now in it’s fourth year, the ride has grown increasingly popular with the help of social media (their Facebook page is approaching 3,000 members) and word-of-mouth. The Slow Roll season opener was the premier event as part of North American Bike Week, modeled after the Motor City’s North American Auto Show, a four-day event featured bike rides in both Detroit and Windsor, Canada, a class on basic mechanic skills, BMX demonstrations, presentations on topics such as Detroit greenways, and a charity pre-party at Cobo Hall. Slow Roll Detroit has released their April schedule, featuring a new venue to meet each week for food and drinks before and after the rides, such as St. Andrew’s Hall, Union Street and Ottava Via. Looking for other options to cycle into spring? There are plenty of recurring bicycling events in the city:

So roll up your pants, dust off your helmet, grab a tube and get riding! You can look for me at several of these bicycling events this summer in Detroit via Twitter @xcrunner2211.