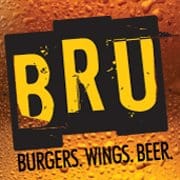 Back after a successful first go in 2011, the BRU Fest fundraiser returns this June 16th, from 7:00 p.m. – 11:00 p.m., for more food and beverages in Royal Oak Farmer’s Market. With the purchase of a $39 ticket, patrons receive ten tickets for five ounce beers, along with all the burgers, wings, and desserts they want!

Providing the beer is Bell’s Brewery, which has been producing beer in Kalamazoo since 1985. Among the fifteen premium beers Bell’s will be serving are Two-Hearted Ale, Hell Hath No Fury, and the overwhelmingly popular summer beer Oberon Ale. For those of you who have done the math (ten tickets, fifteen beers), don’t worry: additional drink tickets are only a dollar a piece.

But it’s not just about the beer. Providing the perfect compliment to the huge selection of Bell’s brews will be wings from Buffalo Wild Wings Grill & Bar and burgers from Bagger Dave’s Legendary Burger Tavern. For those of you who (somehow) don’t know Buffalo Wild Wings, their wings and specialty sauces have won countless awards for superior taste over the years.

Though it may not seem possible, BRU Fest goers, you absolutely must save room for dessert supplied by the Ferndale-based Treat Dreams. Made in small batches at the Ferndale store, Treat Dreams is known for their exotic and creative flavors. At last year’s BRU Fest, the brilliant minds behind the ice cream shop even devised some alcohol-infused flavors using beer from Bell’s Brewery.

Every sip and bite you enjoy won’t just be great for you: all of the proceeds from the event go to benefit the Children’s Leukemia Foundation. This Michigan-based nonprofit charity is dedicated to providing affected families with information, money, and emotional support, as well as donating millions of dollars to leukemia research.

So if enjoying great food, great drinks, and supporting a great cause sounds like an awesome way to spend a Saturday night, pick up some tickets to BRU Fest 2012! And be sure to keep track of event news by liking BRU Fest on Facebook and following their event page on Twitter.