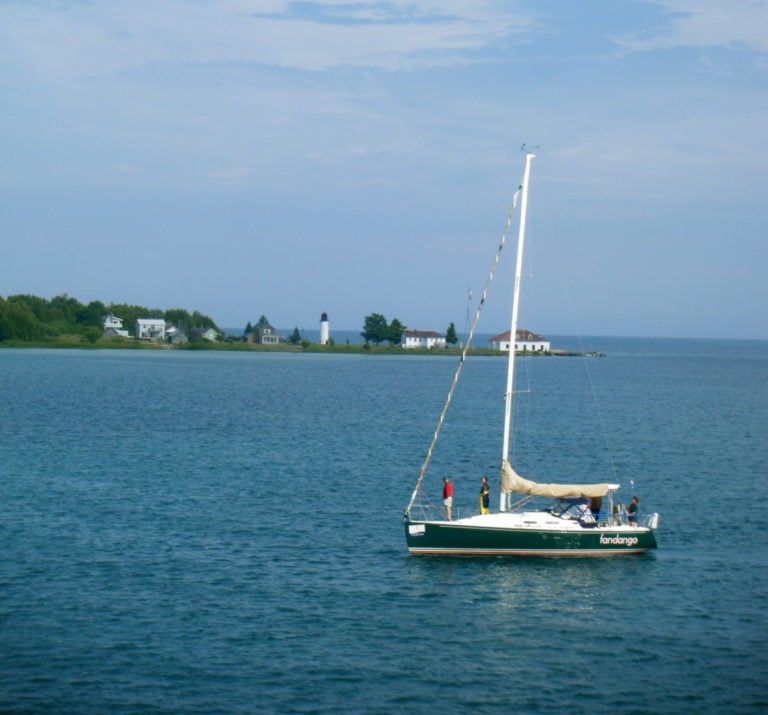 It’s the largest island in Lake Michigan. It’s the most remote inhabited island in the Great Lakes. It’s the only place in the United States ever to have had a reigning monarch. It’s “America’s Emerald Isle.” It’s Beaver Island, and it’s one of Michigan’s most beautiful secrets.

Since before I could walk, I’ve been traveling to Beaver Island, to a tiny cabin perched on a bluff overlooking a rocky beach that meets the churning waters of Lake Michigan. But my visits to Beaver Island aren’t just special because I love the musty smell of the curtains or the way the sound of crashing waves lulls me to sleep in my bunk bed, or because I can walk the beach for miles without seeing another human soul. It’s the island itself that creates a kind of magic— of its people, its culture, its wild beauty—for anyone who visits it, and it’s the island that always calls me back.

Beaver Island, as any of its 700 locals will tell you, is magical because it’s unspoiled. Life here is simple, and that’s the way they like it. In the village of St. James, located on the island’s northeastern shore, you won’t find any charming horse-and-buggy rides or colorful fudge shops. Instead, when you pull up to the dock on either the Emerald Isle or Beaver Islander, the two Charlevoix-based ferries, you’ll see the whitewashed store fronts, a dusty main road, and you’ll hear the harmony of church bells and laughter coming from an Irish pub. You’ll find a place where cars stop in the middle of the street to talk to friends, and fisherman haul in daily loads of fresh whitefish for every restaurant on the island. And surrounding all of this is one of the most beautiful harbors on the Great Lakes. With its turquoise waters, the clanging of sailboat masts, and a lonely lighthouse tower silhouetted against the clouds of an island sky, you won’t need to bother buying a postcard, because you’ll never forget a place like this.

In many ways, Beaver Island is a time capsule of the American story. Originally settled by Native Americans, some of whose descendants still live on the island, this water-locked, 54 square-mile piece of land that is 32 miles from Charlevoix has a past that chronicles the turbulence and persistence of the American immigrant experience. Founded by James Strang as a Mormon settlement in the mid-19th century, it became the only place in the United States ever to recognize a monarch when Strang declared himself “king” of the people of Beaver Island. Following his assassination in 1856, the island saw a huge migration from Ireland, establishing a strong Irish culture that, due to its isolation from the mainland, remains strong today. In fact, no visit to the island is really complete without sipping a Guinness at The Shamrock or tapping your feet to the fiddle of a live Irish band. The motto of the islanders is “Céad mile fáilte,” Gaelic for “a hundred thousand welcomes,” and one friendly smile will tell you that they truly mean it.

But Beaver Island is more than its dramatic history and delightful culture. It’s also one of the few places in Michigan where nature is truly untouched. With miles of hiking and biking trails, sandy beaches, and inland lakes, it’s a Mecca for the outdoor enthusiast. In addition, museums, boutiques—many of which feature hand-made art and jewelry, several restaurants and pubs, as well as a golf course, make the island the perfect destination for the entire family. You can reach Beaver Island by ferry with the Beaver Island Boat Company, or by plane with Island Airways or Fresh Air Aviation, and options for accommodations include motels, camping, and cabin rentals. For more information, visit the website of the island’s Chamber of Commerce.

Beaver Island is a northern Michigan paradise where the water is bluer, the trees are greener, and life is experienced slower. Take your family, take a friend, or just take yourself. The island will do the rest.