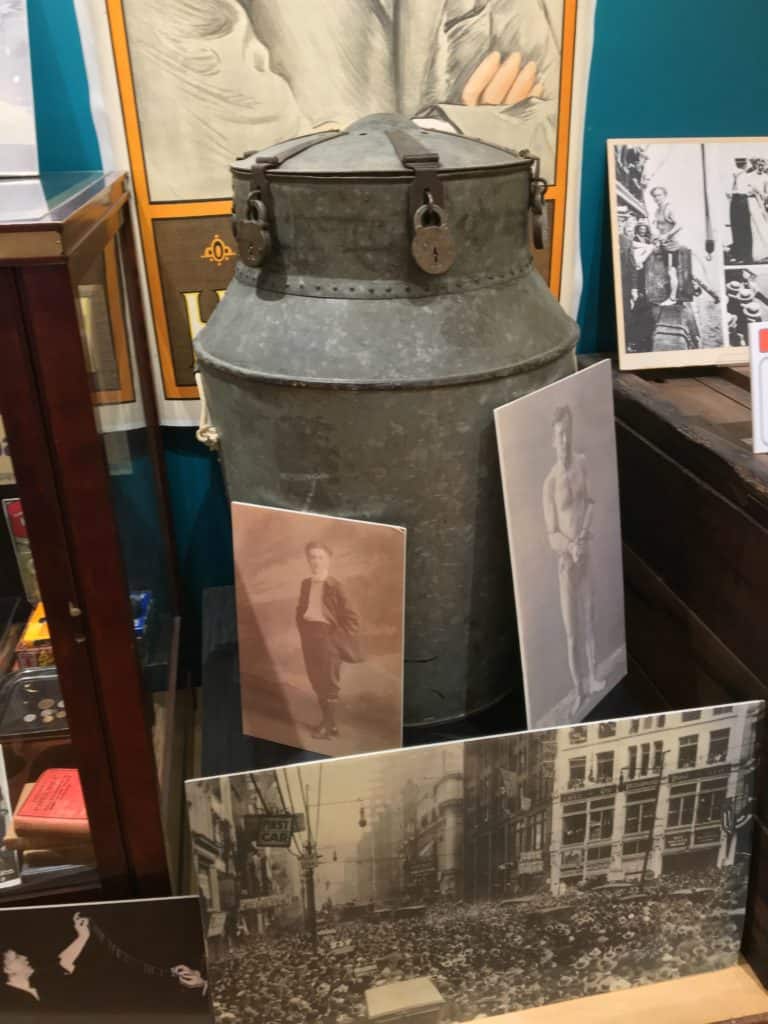 Nestled on the main street of Marshall, Michigan, the American Museum of Magic is not necessarily notable. Besides the name of the museum inscribed above the door, it appears very similar to any of the other buildings on the block. However, when you step inside, the wonderment begins. The collection of artifacts is vast, some of magicians and performers you’ve heard of, most of them names that aren’t as prominent. In the center of the first floor is a collection from the one performer of death-defying feats that everyone has heard of, and the performer that a seance aims to contact this Halloween. That collection belongs to Harry Houdini.

The American Museum of Magic’s Houdini collection is impressive, and includes a milk can of the variety that Houdini would escape from on numerous occasions. I spoke to John Sherwood, a Marshall resident and member of the International Brotherhood of Magicians, who enlightened me on the collection and the event. Sherwood and his son actually performed with the milk can for three years with the blessing of museum founder and avid magic collector, Bob Lund, who passed away in 1995.

Sherwood told me a story about Houdini possibly reaching out to him personally. While he and his son were practicing with the can, they ran into an issue. They both knew how the escape was supposed to work, but once in the can, the method wasn’t working. Sherwood said, “I had an illumination, something came in my head. If I were really Harry Houdini, the first thing I would be would be about a foot shorter than I am [Harry Houdini was approximately 5’3; John is over 6′ tall].” That illumination led Sherwood to the realization that his and his son’s (who is also quite tall) centers of gravity are much different than Houdini’s. Sure enough, a shift inside the can was all that was needed for the escape to work. “At that point … I knew that was Harry Houdini’s can made for him, and that somehow he had communicated to me from the great beyond,” Sherwood told me with a huge smile.

In life, Houdini had a complicated relationship with seances, Sherwood explained. “At first, he played fast and loose with what could be called the fraudulent side of magic where he dabbled with convincing people that he was actually in touch with the dead,” he said as he guided me around the American Museum of Magic. He elaborated that this was when times were hard for Houdini and his wife, Bess, and this type of magic was a way to pay the bills. He further explained that it was after the death of Houdini’s mother that he began his efforts into debunking mediums, as he could see through the tricks of everyone he contacted in an attempt to reach his deceased mother.

As far as the seance this Halloween, there will be no tomfoolery or trickery at the American Museum of Magic, it is also not a religious event. “We are not spiritualists, we’re not mediums, we’re not people who believe in the paranormal,” Sherwood said. Instead, this is a group of skeptics performing an experiment. If anything does happen, every attempt to rationally explain it will be made first.

“One of these posters might suddenly detach from the wall during the seance. It might have happened anyway, but if you believe then that’s your proof. Well, empirical science says that belief has no factor in a test such as that,” Sherwood summarizes. That being said, there are many ways being set out for Houdini to make himself known. A lox-and-bagel sandwich is being placed into the milk can, as that was Houdini’s favorite snack. The hope is he might get hungry and have a bite, manipulate the milk can in some way, or possibly speak through the spirit horn that the American Museum of Magic has on hand.

This will be the second attempt made at the American Museum of Magic, the first taking place back in 1978. Sherwood was a part of the original seance, which took place on the 52nd anniversary of Houdini’s death (Houdini died at the age of 52). The original seance produced no sign of the famed escape artist. The lox-and-bagel sandwich was also used as a lure then, but the fact there was no cream cheese and the possibility the bagel was not kosher are listed as reasons Houdini might have stayed away. The new seance will also be updated to include references to the original, plus an empty chair will be placed out in honor of Lund.

“On Halloween Day, The American Museum of Magic is going to open up at 10 o’clock that morning. By about 1 o’clock, we’re going to begin a reception… and we’ll welcome people to start milling around and preparing for the seance event which is going to get underway at 2,” explained Sherwood. Houdini died at Grace Hospital in Detroit at 1:26pm, but the time has been adjusted to 2:26pm to account for Daylight Saving Time. Sherwood continued, “At that point, we will rally people around Harry Houdini’s milk can, and those who are sitting at the seance circle will take their positions. About 15 minutes after 2, we will get very serious.” Throughout the next 15 minutes, the script will be read, including pauses for absolute silence to let Houdini make his presence known. While phones must be silenced, onlookers may take photos and record whatever they please, possibly in the hopes of capturing Houdini on film.

While Halloween and October are mostly known for the spooky and frightening, this event is a good reminder that there’s more to the holiday than that. It’s a time to celebrate the extraordinary and wonder of all kinds, including magical feats and death-defying escapes. Houdini knew that when he was alive, and it’s something the American Museum of Magic aims to keep alive for years to come.

Can’t make it to the seance? The American Museum of Magic is open throughout the week for tours. For pricing, information, and directions, visit their Facebook page.